This article is about the thieves found in the wilderness. For other uses, see Thief. 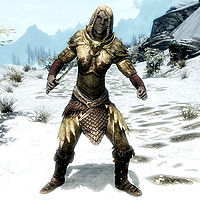 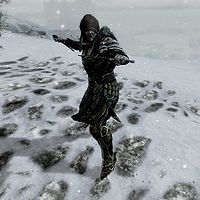 They all wear leveled light armor, a cuirass and a pair of boots with a 50% chance of a pair of gauntlets, all items leveled to glass quality at level 36. To hide their face they will wear either a mage hood or a torturer's hood. They will always carry a lockpick, two leveled daggers (up to Daedric quality at level 46), a level-dependent gem, and a few gold coins.

They will approach you and demand gold. They can be paid off, bargained with, or, if you are a member of the Thieves Guild, persuaded to walk away. They will show extra respect if you are a Nightingale. Additionally, if you are wearing any piece of Nightingale armor, the thieves will offer you "your cut". If wearing a piece of regular or improved Thieves Guild armor, they will give some gold or a few lockpicks as a gesture of goodwill.

If you wear a piece of Nightingale armor, they will greet you with deference: "Hail, Nightingale! Luck has shined down on me and made me a rich man [sic]. Here is your cut, as promised." Likewise, if you wear a piece of Thieves Guild armor, they will say, "Hail, brother/sister! I saw you walking there and thought you could use this." Either way, they will leave you with some gold or lockpicks, wishing you well: "Good luck out there!"

If you are not wearing Nightingale armor or Thieves Guild armor, they will threaten you: "All right, hand over your valuables, or I'll gut you like a fish." You have a variety of possible responses with differing outcomes. If you fail to persuade or intimidate them, they will tell you, "I'm not going to ask again." and you can try your remaining options.

"Here, take it. Just leave me alone." (Hands them gold)
"Ha, what a coward. Didn't even put up a proper fight." (They leave you alone)
"I'd rather die!"
"Then I guess that's your last request, fool!" (They turn hostile)
"Walk away. Right now. (Intimidate)"
"Well. I, uh, can see you're not one to be trifled with. Let this be a warning to you!" (Passed: they leave you alone)
"Nice try, but you don't scare me." (Failed: they offer you a second chance)
"Do I look like I have any money? (Persuade)"
"No, I guess not. Well, get out of here before I change my mind." (Passed: they leave you alone)
"Yes, actually. You look like you're lousy with gold." (Failed: they offer you a second chance)
"Whoa, brother [sic]. Don't you recognize a fellow Guild member?" (If you carry a piece of Thieves Guild armor)
"Of course! I've seen you at the Flagon. My mistake. Good luck out there!"
"I would think you'd have more respect for a Nightingale." (If you carry a piece of Nightingale armor)
"A Nightingale? Oh, I had no idea. My apologies. Good luck out there!"
"I don't have time for this."
"Don't you walk away from me!" (Turns hostile)