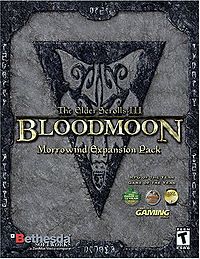 Bloodmoon is the second expansion pack for Morrowind, set on the icy island of Solstheim, northwest of Vvardenfell. As the East Empire Company struggles to establish a new colony on the frozen shores, mysterious occurrences and the arrival of werewolves begin to transform the land. The native Skaal tribe herald the changes as omens of the Bloodmoon Prophecy, and the start of the dreaded Hunt of Hircine. As the Nerevarine is unwittingly drawn into the hunt, there is only one choice to be made: to become the predator, or the prey.

Bloodmoon takes you to the frozen Island of Solstheim where the Empire is establishing a new mining colony - a venture being threatened by the prophecy of the Bloodmoon and rumors of werewolves. Your journey north from Vvardenfell by ship will bring you to a whole new world, where the ashlands and rainy coasts of Morrowind give way to forests and hills covered with snow and ice. In the huge wilderness of Solstheim you will experience snow, blizzards, and new creatures, including frost trolls, ice minions, and wolves. —Official Summary