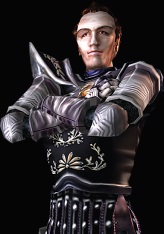 Also known as Cyrodils, Cyrodilics, Cyro-Nordics and Imperial Cyrods, the well-educated and well-spoken Imperials are the natives of the civilized, cosmopolitan province of Cyrodiil. Imperials are also known for the discipline and training of their citizen armies, and their respect for the rule of law. Though physically less imposing than the other races, the Imperials have proved to be shrewd diplomats and traders, and these traits, along with their remarkable skill and training as light infantry, have enabled them to subdue all the other nations and races and erect the monument to peace and prosperity that comprises the Glorious Empire. Their hegemony has waxed and waned throughout the eras, and most historians refer to three distinct Empires, the ends of which each mark a new epoch in Tamrielic history.

Imperials are a very versatile race. They are considered the most balanced race in Morrowind, and are especially suited for adaptability. This is due to the fact that they can specialize in any of the three main archetypes easily with their beginning attributes and skills. Imperial characters do not have a standard combat talent, but their flexibility can be utilized in many situations, and Imperial characters throughout the game will have many varied roles.

Imperials start with the highest Personality of any race, and with their Charm Power, Voice of the Emperor, and with their bonus to Speechcraft and Mercantile, they have no trouble persuading just about anyone or making good trades. To them, training is cheaper and equipment is easily obtainable.

The Lady Birthsign and Lover Birthsign have great synergy with Imperials; starting out with a possible 85 Personality can lead to great things early on, and their Star of the West power can counterbalance the penalties of the Lover's Kiss. Their skill bonus to Speechcraft and their Charm power makes persuasion a powerful tool. Natural Disposition will often be very high, in many scenarios allowing for different opportunities than would otherwise be possible.

Melee combat is most effective for this race. With Imperials' average melee combat attributes, the ideal fighting character would raise Strength, Endurance, and Agility as quickly as possible. They have a bonus to Long Blade, a skill which uses some of the most common and powerful weapons in the game. And to turn the tide of battle they have a useful Power, The Star of the West, which Absorbs Fatigue. In the early game, a character with hand-to-hand as a major or minor skill can combine The Star of the West to level up hand-to-hand and also stunlock most opponents. Even late in the game Star of the West may prove useful.

Stealth and Magic are not hard to utilize for Imperials. With their high Personality, Illusion can be raised immediately, but their other skills and attributes must not be neglected. Magic characters need more Willpower and Intelligence while stealth characters need Agility and Speed. The Atronach Birthsign is a good match for the rich Imperial, as buying Potions of Magicka will make up for its Wombburn effect.