This article is about the skills associated with becoming Emperor. For the achievement, see Emperor!. 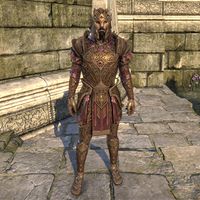 A character in Emperor's Regalia

For each Campaign in the Alliance War, it is possible for a player to be selected as Emperor. There can only be one Emperor for each Campaign, though there may be multiple campaigns, and thus multiple Emperors. In order to be crowned Emperor, your Alliance must control all six of the Keeps surrounding the Imperial City (Chalman Keep, Blue Road Keep, Castle Alessia, Castle Roebeck, Fort Ash and Fort Aleswell) and you must be the highest-ranked player in your Alliance. Your ranking is affected by the number of Alliance Points you have, which can be earned by participating in PvP battles. Your crown will be forfeit if your Alliance loses control of all six surrounding Keeps or if you leave the Campaign for another.

By becoming Emperor, you also gain a unique costume and the 'Emperor' title. After being deposed, your title will change to 'Former Emperor' but you will still have access to the costume.

As Emperor, you gain access to several innate Passive abilities. These are only available while you are Emperor and in your home campaign, and will be removed if you are deposed or leave Cyrodiil.

Innate abilities are active all the time, and do not require the investment of skill points.