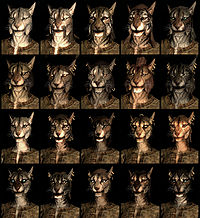 A compilation of the preset Khajiit faces available in Skyrim

Illustration of a typical Khajiit male

Khajiit are cat-like people who come from Elsweyr, known for high intelligence and agility. These traits make them very good thieves and acrobats, but Khajiit are also fearsome warriors. However, they are rarely known to be mages. Khajiit mostly stay on land, but piracy and Skooma trade does draw some to work as sailors.

Khajiit anatomy differs greatly from both men and elves, not only because of their fur, tail, and sometimes toe-walking stance, but also their digestive system and metabolism. Khajiit, Argonians, and Imga are the so-called "beast races" of Tamriel because of these large differences. Khajiit have a lifespan similar to that of humans. There are no well-documented cases of cross-breeding between Khajiit and other races, though there are rumors of such a thing. The foreign appearance and behavior of Khajiit make them common targets of racial discrimination.

Hailing from the province of Elsweyr, they are intelligent, quick, and agile. They make excellent thieves due to their natural stealthiness. All Khajiit can see in the dark at will and have unarmed claw attacks.

Khajiit, like Argonians, make good thieves due to their bonuses in skills typically associated with stealth-oriented classes. Night Eye is a handy lesser power while dungeon-crawling or for seeing at night, when many thieves do their work. Their claw bonus helps in brawls, and, combined with the Fists of Steel perk, makes unarmed combat viable.

In combat, players have the opportunity to take advantage of the Khajiit's bonuses to one-handed and ranged weapons, and their strong bonus to Sneak makes sneak attacks accessible at early levels.

Khajiit may be taunted with "You'll make a fine rug, cat!" and "You remind me of my cousin's cat. Killed that too!" in combat. Upon finding a dead body they may also say "I'll claw the eyes out of whoever did this!"