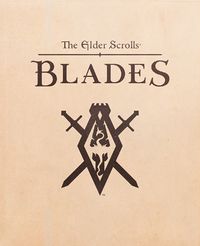 The Elder Scrolls: Blades is a free-to-play spin-off of the Elder Scrolls franchise. It takes place primarily in the province of Cyrodiil, and features procedurally-generated dungeons (similar to Arena), rebuilding a destroyed town, and PvP arena combat. Originally planned to be released in Fall of 2018, the game was later set to release in early 2019, with limited early access beginning on March 27, 2019. It left open Early Access on May 12, 2020. Blades is currently available on phones, tablets, and Nintendo Switch; it will eventually be released on current generation consoles and PC, and will be available to play in VR. Additionally, the game supports cross-platform play, allowing you to carry your progress across multiple platforms.

"You are member of the ancient order of the Blades. Forced into exile, you seek refuge in your remote hometown only to find it reduced to rubble. Now, it’s up to you to restore your town back to its former glory."
— Blades Reveal text