Grummites are violent, primitive humanoids native to the Shivering Isles. They are a species of amphibious frog-like beastfolk with a complex life cycle and incredible regenerative abilities when in water or rain. Like other creatures native to the Isles, Grummites take differing forms depending on whether they inhabit Mania or Dementia.[1]

It is believed that Grummites are the original inhabitants of the Shivering Isles. Some say that they worship Sheogorath, although this has never been proven.[2] Grummites are said to be cunning craftsmen[3] and have the ability to create tools and adornments, including crude weapons, clothing, jewelry, poisons, and even magical staves.[1] They congregate in groups, often being drawn into the depths of the realm's many ruins originally built by the Predecessors prior to a previous Greymarch.[4] The reason Grummites are so often found occupying these abandoned subterranean halls is due to their strange attraction to Madness Ore, a substance said to contain the souls of ancient madmen. Indeed, Grummites are often found to possess shards of Madness Ore, and have been known to collect the magical matrices spread throughout the realm by the master Madness Ore smiths of Crucible.[5] Grummite encampments are also often found throughout the watery root tunnels that run beneath the surface of the Isles.[1]

Due to their hostile nature, Grummites have little to no interaction with the mortal inhabitants of the realm. It has been hypothesized that they trade with the other races, but there is no evidence to support this.[3] They have been known to steal precious items from travelers who venture too close to their underground lairs.[6] A race of pygmies once inhabited the Isles until they were all eaten by Grummites.[7] The Dark Seducers and Golden Saints who patrol the realm's roads are often required to fight off attacking Grummites. Grummites form an important part of mortal culture on the Isles, with statues depicting the creatures being found in ancient ruins built prior to previous Greymarches.[1]

Grummites' obsession with seeking out Madness Ore has been known to result in them coming into contact with elements of Order, such as their occupation of Xeddefen and Xedilian. The Grummite shamans occupying Xedilian even affixed Focus Crystals to their staves to utilize the crystals' inherent lightning magic, which became an issue in 3E 433 when Sheogorath required the crystals to restart the Resonator of Judgment.[8]

Grummites have a complex life cycle which is poorly understood by mortals. As such, most sources are contradictory on the details. It is usually understood that Grummite eggs hatch into aquatic Pollywogs, which soon mature into amphibious Baliwogs. Baliwogs are thought to then grow into either Grummites or Scalons.

Like frogs, Grummites are egg layers. Their frogspawn-like eggs are placed either in mounds on the edge of a body of water or in sacs hanging above the surface. Grummite eggs are a common foodstuff for the realm's mortal inhabitants (despite the detrimental effects of eating one), and also have useful alchemical properties.[9] Although some literature claims that adult Grummites abandon their eggs once laid,[3] it has been observed that Grummites can often be found nearby, guarding their egg sacs.[1] Once laid, the female often leaves the water to hang the eggs nearby, to keep them out of reach of aquatic predators, while still allowing the Pollywogs to fall into the water when they hatch.[3]

Pollywogs are the tiny, infantile life stage of a Grummite. They are fully aquatic and possess no limbs. Although no bigger than a hand when they hatch, Pollywogs quickly grow in size and develop four limbs to become the amphibious Baliwog within a few weeks.[3]

Baliwogs are said to be the larval stage of the Grummite,[10][UOL 1] although this relationship has never been proven.[11] They frequent the lakes, rivers and bogs of the Shivering Isles. They have four limbs, a powerful tail, razor-sharp teeth, and a set of long spines along their back.[1] They are less dangerous when young, but over the course of two years a Baliwog will increase in size, growing to be larger than a man in both length and weight,[3] and developing a large dorsal fin on its back. The most dangerous Baliwogs are known to be venomous, although a bite from any Baliwog has the risk of transmitting Swamp Fever, a disease which they often carry. A single pearl can sometimes be harvested from the body of a dead Baliwog.[1] Their meat is a common local dish for residents of the Shivering Isles, who often smoke Baliwog legs.[12][13]

Eventually, the adult Baliwog will feel the urge to seek out deep water and bury itself in the mud. It hibernates there for many months, gestating into a Grummite and emerging from the mud fully formed.[3] It is believed that Baliwogs can also grow up to be Scalons.[2] 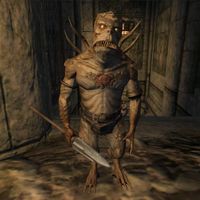 The main adult form of the Grummite most closely resembles a frog-like humanoid, although they can grow to be much larger than a mortal. They walk upright on two legs and possess sharp teeth as well as a set of spines along their back. Manic Grummites are tan and green in color, while Demented Grummites take on a duller tan color.[1] The Grummites native to the root tunnels at Notehollow have even been known to be blue, yellow, or green.[14] They can be skilled in both melee combat and archery, and have been known to utilize rudimentary magic and powerful poisons. Grummite shamans have also been known to become powerful magic users known as magi, who are often armed with magical staves and possess the power to turn invisible.[1]

It is unknown how advanced Grummite tribal society is, although they are known to live together in camps and have even been observed keeping their own kind as prisoners.[15] Grummites which are newly emerged from gestation never leave the water and are consumed with the urge to mate. For males, this urge subsides after six months to a year; for females, this period ends as soon as she lays her eggs. The adult Grummite then takes to dry land where it will spend the remainder of its life, although they never venture too far from water. They possess a primitive and poorly-understood culture, including the raising of totem poles. Grummites have been seen wearing garments made of marine shells. Their magi and shamans wear more elaborate accessories.[1] It has been speculated that Grummites are distantly related to Argonians but there is no evidence to support this.[3]

The mortal inhabitants of the Isles have been known to eat Grummite gumbo.[16]

Grummites are best known to the people of Tamriel for the distinctive yellow pearls they produce. At some point prior to 2E 582, a mage from High Rock attempted to transport Grummites to Tamriel in order to harvest their pearls, but he was killed when locals razed his tower to the ground. Several of these pearls were unearthed on the island of Eyevea after its return to Tamriel circa 2E 582, having spent several millennia in the Shivering Isles.[17]

Scalons[18] (or Scalon[11]) are hulking amphibious monsters often found near water or in the company of other wild beasts throughout the Isles.[1] They are a type of Grummite[10][UOL 1] believed to develop from an adult Baliwog,[2] but unlike adult Grummites, Scalons show no sign of intelligence and are treated as pests by the denizens of the Isles. Indeed, Sheogorath himself has been known to intervene when Scalons attack a mortal settlement.[19] They walk on two legs and possess sharp claws and a powerful leaping attack, as well as the ability to turn invisible at will. Scalons from Mania take on a vibrant orange color, while Demented Scalons possess a turquoise coloration. Scalons carry a horrific number of dangerous diseases which can be contracted from their bite, known variously as Scalon Fever, Scalon Blight, and Scalon Sunburn.[1][2] Scalon fins are often harvested for their useful alchemical properties; by 4E 201, samples of Scalon fin could be found circulating on Tamriel as a rare alchemy ingredient.[20][21]

There is contradictory evidence to suggest that Scalons do not develop from Baliwogs, as they reportedly have a separate hatchling form.[22] 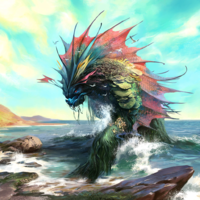 Spawn Mothers are a type of Grummite[10] of which very little is known. They possess four limbs and rows of colorful dorsal fins along their back. Spawn Mothers are truly gigantic creatures, towering high above even a Scalon. They are amphibious but appear to spend a great deal of time beneath the surface of the water, resulting in the growth of seaweed and plate corals on their body. When a Spawn Mother emerges onto dry land, it results in a feeding frenzy from seabirds.[23]