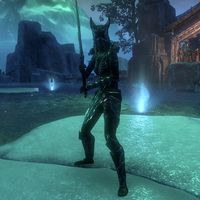 Huntsmen are a humanoid Daedric race primarily associated with the Daedric Prince of Hunt, Hircine.[1] They were also found in the service of Demiprince Fa-Nuit-Hen.[2] Huntsmen are known to be highly intelligent beings, and make capable hunters, warriors and mages.[3]

These mysterious humanoid servants of Hircine from the Hunting Grounds were described as "spear-shakers, fewterers, and whippers-in of the Lord of the Hunting Grounds". The appearance of Huntsmen was believed to evoke Hircine's Aspects. Mortal followers of Hircine honored him by emulating Huntsmen apparel.[1] They follow Hircine and pursue great beasts, people, and even their own kind.[4]

Huntsmen resemble Men and Mer, but instead of mortal hearts they have daedric hearts.[5][6] They are also typically seen wearing masks resembling bird's faces.[7][6] These daedra make references to wearing the skin of their mortal prey to live as them on Nirn, which they will make their hunting grounds.[8] At least some of the Huntsmen can turn into a werebeast.[2] Although little is known of their hierarchy there are four known groups among them: Davlinn,[5] Duneir,[9] Gamir[7] and Mar-Gamir.[6]

Huntsmen weapons are often adorned with antlers. Axes evoke Uricanbeg, the Stag aspect of Hircine. Their iconic bows are composite of wood, horn, antler, and hide and honor Storihbeg, the Wolf Aspect of Hircine. Their single-edged daggers pay homage to Gulibeg the Quick Fox and maces represent Hrokkibeg the Mighty Bear. Staves used by Huntsmen, similarly to the axes represent the Stag aspect and are designed to amplify both Destruction and Restoration magic. Destruction spells are cast from the front end and Restoration are cast from the hind.[1]

Huntsmen in general favor relatively light armor choices for agility and swiftness, but their pauldrons are sturdy. Their boots are based on the boots worn by Hircine in his Alrabeg the Hunter aspect.[1] They wear the skins of their kills as their armor.[8]