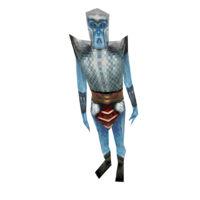 The Ice Tribes (also referred to as glacier tribes[1]) are blue-skinned, tribal[2][3] humanoids known to be encountered in northern, frozen regions of Tamriel. Their physiques appear quite muscular and some can be seen with two blue spike formations upon their shoulders.[2] They are known to make allies with creatures like trolls, snowrays,[4] and the fearsome Gehenoth.[5] They are also capable of negotiations and making deals with men.[6]

In 3E 397, Ice Tribes inhabited Glacier Crawl in High Rock at the time when the Soul of Conflict ventured through it.[4] The Hero defeated the Ice Tribes there, using the keys they carried to unlock access to the frozen-over airship that crashed into the glacier long ago. There, the Hero slew the Ice Tribes' Glacier Chieftain and retrieved the Star Tooth.[7]

Circa 3E 427,[UOL 1] the Ice Tribes inhabiting the areas outside of Dawnstar[8] had raided the settlement. One of Vinticae's four champions had secretly set the Ice Tribes upon the town.[1] Not knowing which of his champions was the traitor, he banished them all. Vinticae sent for the Hero of Dawnstar, and with the help of the oracle/healer Eustacia, the Hero interrogated the champions. Once the Hero exposed the true traitor, the Ice Tribes and their allies began their final assault upon Dawnstar. Despite the city's outer defenses, sheer numbers allowed some invaders to get past the walls. With the aid of the three loyal champions and the power of Starfrost, the Hero slayed the Ice Tribes, concluding the battle with the defeat of the Gehenoth Thriceborn.[5]

Beyond Dawnstar, the Ice Tribes had their own locations called the Ice Tribe Haven and Ice Council.[8] The Ice Tribes give themselves ranks like Scout, Warrior, Bowman, Raider, Leader, Captain, and Chieftain. Their ranks are always preceded by another word, including Ice, Hungry, Winter, Snow, Blizzard, Dawn, Elemental, Elite, Glacier, and Thriceborn. They are known to wield pole weapons, axes, daggers,[9] and bows. They can be seen using armors of cloth and metal, shields, and jewelry.[2][3][UOL 2]