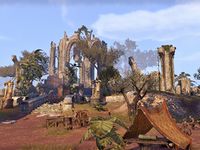 Senalana is an Ayleid ruin located in the Northern Woods of Valenwood, west of Arenthia in the highly-contested Reaper's March region.

During the Alessian Slave Rebellion, the Ayleids that founded Senalana fled from their original holdings in the West Weald of Cyrodiil to the north. After crossing the Strid River however, the Ayleids only traveled a league or so into Valenwood before resettling, assuming that the vengeance of their former slaves wouldn't follow them across the border. They built Senalana as a trap-filled vault to hold the Grand Circlet of Elven Authority, a powerful artifact that would allow the wearer to dominate all elves. However, the settlement soon fell to the vengeful Nedes, and Senalana was left abandoned.

In 2E 582, the Empire of Cyrodiil attempted to expand into Reaper's March, sending an army of Colovians into the Northern Woods. A woman named General Lavinia was responsible for capturing the city of Arenthia, and following the city's occupation she detached a large group of invaders to occupy Senalana in search of the Grand Circlet of Elven Authority. The occupation was spotted by Aldmeri Dominion scouts, who were able to respond immediately. A small group led by Razum-dar entered the ruins to destroy the Circlet, but the Colovians collapsed the main entrance behind them and activated an Ayleid ward on the rear entrance by removing two Welkynd Stones. Aboveground, Senalana became a battleground as the Dominion soldiers scrambled to learn what was happening.[1]

The Vestige then arrived as Senalana and recovered the two Welkynd Stones from the Colovian camp before entering the ruins in search of Razum-dar. Although the Dominion agents were trapped, Raz was able to communicate instructions on how to destroy the Circlet. Doing so would overload the Ayleid defenses, collapsing the entire complex and sealing Raz and his group within along with the Colovians. Alternatively, simply activating the defenses and taking the Circlet from the ruins would allow the Dominion agents to escape, while still killing the Colovians. The only way to destroy the artifact was through the use of a magical furnace within the ruins; faced with the burden of keeping the Circlet safe should it be removed from the ruins, Raz and his group were resigned to die instead. However, it's unknown which option was taken by the Vestige. Regardless, the incantations needed to use the Circlet were destroyed within the ruins by the Dominion agents, and the Colovians were driven off.[1]