Cadwell, a Nedic knight of the Merethic Era

"To the heavens above, we raise our eyes, our hands, and our hearts." — Sample from a Nedic prayer[1]

The Nedes (also known as the Nedic peoples) were a human race (or a group of races) of unknown extraction, who inhabited much of Tamriel during the Merethic and First Eras. The society of the Nedes who lived in the Deathlands region largely revolved around the study of the constellations, and worship of beings known as the Celestials. Nedic culture experienced a sharp decline over several centuries as they began to assimilate into other cultures, before being completely exterminated by the Yokudan invasion of the Deathlands.[1][2][3][4]

A Nedic tapestry depicting the Celestials

Although the origins of the Nedic peoples are hotly debated, the most widely accepted theory is that they came from Atmora in many waves, and after arriving in what is now Skyrim they soon began to spread throughout much of northern Tamriel,[5][6][7] having occupied nearly every corner of the continent before Skyrim was even founded. While their beginnings are murky, the earliest known traces of human presence in Tamriel have been dated to the mid-Merethic Era circa ME 1000.[8] For the Nedes, Tamriel became a great mixing cauldron—some Atmoran practices were retained, but many were lost.[7]

There are few sources to corroborate the Nedes originating directly from Tamriel. The Nords believe men were first formed on Throat of the World when the sky breathed onto the land, hence the Song of Return partially referring to the Nords' return to what they believe was their original homeland.[9][10] Supporters of this theory argue that all mortal life started on Tamriel,[UOL 1] and Imperial Geographers sought to historically link themselves to the Nords to gain their support by leaving out any mentions of the existence of humans in Tamriel before the coming of the Nords.[UOL 2][UOL 3]

While Nedes inhabited several of the modern provinces, it was in the sun-baked wastelands of Hammerfell which they knew as the Deathlands that Nedic civilization truly thrived. The Duraki Nedes faced numerous foreign invasions, including both the Ayleids and the Dwemer, who dismissed the Duraki as backward savages to justify subjugating them. These Nedes also frequently clashed with their neighbors, the primitive stone-worshipping Iron Orcs.[2][11] Nedic texts often reference an event called the "Autumn of Snakes", where according to the histories hundreds of mammoth-sized snakes emerged from the ground and devoured whole towns before finally being subdued by the Nede spear-maiden, Ranev the Coal-Eyed Wanderer. Nedic scholars describe the Autumn in meticulous and near-identical detail, though that the event is now known as completely apocryphal.[12]

Despite these frequent conflicts, Duraki culture prospered for centuries in the Deathlands. The Nedes were known to be skilled in masonry, with their bustling cities constructed largely from stone. However, little of this stonework remains, as what wasn't completely destroyed by the invading Ra Gada was often appropriated and modified beyond recognition.[13] While the Duraki were known to be devout star worshippers, during the Yokudan invasion their prayers went unanswered, and many looked to other sources for salvation. This did them little good and the Nedes quickly fell to the Yokudan horde, vanishing from the Deathlands forever.[2] 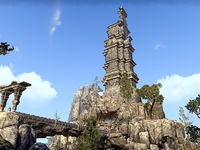 One of the ruined Nedic towers of Skyreach

Nedic settlement within provinces inhabited by Beast races is known to have occurred but is not well-documented. During the Merethic Era, a Nedic fort was known to have been only a short distance from a Dune adeptorium in the province of Elsweyr.[14] Many early human tribes are known to have once inhabited Black Marsh, among them being the Horwalli, Kothringi, Orma, and Yespest.[15]

In many lands the Nedes existed as a minority, and had no choice but to co-exist relatively peacefully alongside elves, oftentimes in a subordinate position. There are records of self-serving Nedic knights going as far back as the Merethic Era, such as Sir Cadwell, the hero of Cyrod and champion of the Third Nedic Massacre who was once a member of Khunzar-ri's Kra'jun.[16] Those Nedes who settled in High Rock stumbled upon the highly sophisticated culture of the Direnni elves, and quickly became vassals under the rule of the elves.[17] Under the Direnni Hegemony, the Nedes lived at the bottom of a strict feudal hierarchy with the elven nobles positioned on top. The Direnni enjoyed many privileges over their human subjects including the 'Perquisite of Coition', the right to engage in recreational intercourse with any Nede of their choice.[18]

Many Direnni took advantage of this and took on Nedic concubines, which often resulted in the birth of mixed-race offspring whom they referred to as Manmer, or Bretons. While the Bretons were not officially recognized as members of the noble houses they descended from, they often occupied social positions above those of the Nedic peasantry. Eventually this arrangement was formalized with the creation of a new caste between the Elves and the Nedes, in which the Bretons enjoyed a comfortable position in society, but were forbidden from marrying Elves in an attempt to preserve the Elven race. Eventually after generations of interbreeding with their Nedic underlings the Bretons were completely assimilated, birthing a new culture with those of the most elven blood on top. In the late First Era the Direnni Hegemony found itself under attack by both the fanatical Alessian Order and the Kingdom of Skyrim. Although the elves managed to repel the invaders, they were left crippled and demoralized, and completely withdrew to the Isle of Balfiera, passing control over the region to the Bretons.[18] 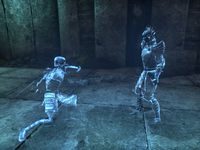 While relations between the Nedes and the Direnni were cordial if rather unbalanced, the Nedes suffered greatly under the tyranny of the Daedra-worshipping Ayleids. The Ayleids would commonly stage raids on Nedic lands, enslaving those whom they captured.[2] Once in Ayleid lands the Nedes were held in bondage alongside members of various other human races, forced to work in a variety of menial jobs, such as agriculture and maintaining infrastructure. In Ayleid kingdoms under the grip of more malevolent Daedric princes, human slaves were subjected to horrific cruelties. In the year 1E 242, the Slave Queen Alessia led a rebellion against the Ayleid slave masters, resulting in the emancipation of all slaves within the Ayleidic empire. While the slaves were freed, centuries of Ayleidic suppression and intermingling with other enslaved groups had taken their toll on Nedic culture in Cyrodiil and all that remained were their mixed race descendants, the Imperials.[19][20][5]

The Nedes also maintained a presence in Skyrim, but little is known of their relations with the native Falmer or the Atmorans who replaced them. The Nedes of Skyrim were believed to be a more primitive people than their cousins in other lands, however their skill in metallurgy was known to be quite advanced.[21] They were generally nomads but still had some form of a religious congregation (worshipping Arkay instead of the Atmoran Orkey).[22] The Nedic peoples of the late Merethic era hunted the lion population of a western valley in The Rift for its furs.[23]

The Nedes spread across northern Tamriel, and once had a presence in Morrowind during the Merethic,[8][24] with tribes that marched and plundered across the land.[25] It is recorded in Dunmeri texts that these Nedes waged at least one bloody war against the ancient Chimer in the early First Era, causing mass death and destruction and refusing diplomatic resolutions with the Chimer. After a few short years they controlled most of the modern-day Stonefalls and cut off reinforcements from the north, before being stopped by the so-called Brothers of Strife, but at a terrible cost for the Chimer.[26][25] 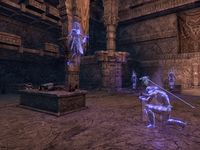 A Nedic general makes a desperate pact with a Nereid to defend Shada's Tear, one of the last standing Nedic cities, from the Yokudans

Over the centuries, various events caused Tamriel's Nedic population to dwindle, such as when the Cyro-Nords captured Nedic ports along the Strident Coast (a somewhat unknown region presumably around the Gold Coast of Cyrodiil and the southern coastline of Hammerfell).[28] The Nedes who inhabited the isle of Herne had long struggled against the elves prior to the Ra Gada, and though they fought a courageous battle under their Warchief Haakon, they fell before the Yokudan onslaught.[29] By the ninth century of the First Era, Nedic culture was confined to the deserts of Volenfell.

In the year 1E 808[30] the "warrior wave" of the Yokudans, the Ra Gada, made landfall in Tamriel. Their arrival would deal a fatal blow to the Nedes. The Ra Gada, under the leadership of the sadistic Emperor Tarish-Zi, quickly swarmed the province, killing or enslaving all that they crossed. Soon the Yokudans had displaced the Nedes everywhere but in the remote region of Craglorn. There, many Nedes embittered by the decline of their culture began to turn to sources of spiritual guidance other than the stars.[1][27] This did them little good when the Ra Gada reached Craglorn, and the Nedes were dispatched as quickly as they had been elsewhere. After years of struggle, Nedic culture had finally met its end, although some accounts claim it was already fading prior to the Ra-Gada.[2]

Though the Nedes no longer exist as a distinct people, much of their culture survives in the societies of their descendants. Even in Hammerfell much of the Nedic religion, custom, and language was adopted by their annihilators, the Redguards.[31] In Nibenay the great old Nedic traditions were maintained, remaining as one of the people true to the original Nedic culture. The Nibenese people are said to be the closest thing to a pure-bred Nede still remaining on Tamriel.[7] Ownership of Nedic possessions (particularly those with inscriptions) came with great prestige.[32] 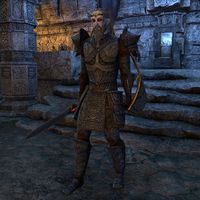 High King Durac, who presided over the council of Nedic kings from other tribes

The Nedic tribes did not all come to Tamriel at once; they came in waves, over a period of centuries, one tribal group at a time. These tribes were far from homogeneous; though all came from Atmora, they all emigrated from different parts of it at different times. Each tribe came with its own culture, and their cultures were further mixed and admixed after arrival in Tamriel. Some were as different from each other as Reachman and Redguard.[6][7]

The catch-all term 'Nede' is applied so broadly to Merethic-Era humans as to be almost worthless.[6] The term 'Nedic Tribes' actually covers a wide panoply of different human cultures from different parts of Atmora, with a variety of traditions and practices.[7] Tribes were led by kings and warchiefs, ruling different parts of the Nedic realm, and were known to meet in councils with other Nedic rulers.[33] They'd even diverged genetically, such as those in High Rock mixing with elves to the point of resembling them and the Kothri of Black Marsh developing silver-colored skin. The known names given to groups of Merethic Era humans are as follows, with their status as solely being Nedes considered to be very general: