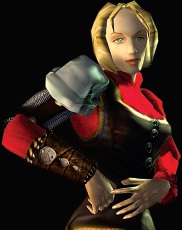 The Nords are the children of the sky, a race of tall and fair-haired humans from Skyrim who are known for their incredible resistance to cold and magical frost. They are fierce, strong and enthusiastic warriors, and many become renowned warriors, soldiers and mercenaries all over Tamriel. Eager to augment their martial skills beyond the traditional methods of Skyrim, they excel in all manner of warfare, and are known as a militant people by their neighbors. Nords were known for a time for their nautical prowess when they migrated from Atmora.

Obviously, Nords are primarily combat-based, so their skills synergize with each other. That doesn't mean they can't be unique, though. Nords seem to be tough characters, willing to suffer some scars in each engagement. More accurately, Nords focus on magical resistance while using combat in their main lifestyle. This essentially makes them a combat equivalent to Bretons. Rather than having a bonus to magical skills, you're given a variety of options for how to work your character. This also means it can be easier to focus your character's development than as a Breton.

The Woad shield effect is very useful early in the game and in tough situations it will often mean the difference between life and death. The Thunder Fist is powerful early on too, provided you hit your enemy with it, but it soon loses its effectiveness as tougher enemies appear. Keep in mind that it is also useless against other Nords.

The Nord's natural combat abilities, combined with their natural immunity to frost and resistance to shock damage, means that facing off against enemies early on in the game will be no problem even to inexperienced players. Having a Nord who has endurance as a favored attribute will also allow them to maximize health gain early on which is hugely beneficial to any type of player.