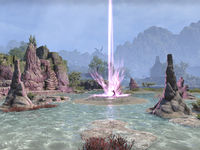 Abyssal Geysers are enormous geysers set up by K'Tora and activated by the Court of Bedlam. Their purpose is to sink Summerset, to bring it under K'Tora's control. They function as PvE-based group activities that involve fighting "waves of fierce monsters and must be shut down before they overrun the surface".

Later, the operation of Abyssal Geysers is taken over by Nocturnal, following K'Tora's demise during Buried Memories.

Abyssal Geysers can be only found on the coastline of Summerset. They are functionally similar to Dark Anchors and Craglorn group events. 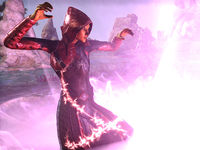 An Acolyte of Bedlam activating an Abyssal Geyser

The geysers, usually resembling normal geographical features, are opened when an Acolyte of Bedlam calls forth Nocturnal's minions through a plume of light. To begin the event, kill the Acolyte—their low health will ensure they die to a single hit. At this point, a number of Yaghra and other creatures will spawn at points around the geyser.

Enemies will spawn in waves. A basic wave consists of one Yaghra Monstrosity and a number of weaker enemies, but when multiple players are present several such groups can spawn in different places. After a number of waves have been cleared, K'Tora, or later Nocturnal, will summon one of the bosses. Note that with smaller groups, a Greater Yaghra Monstrosity (always dropping a jewellery piece) is occasionally summoned instead of one of the named bosses (always dropping a blue enchanting glyph), and is considerably easier to kill. Once that boss falls, you must destroy an Abyssal Pearl in the central geyser. Following this, a Shell Trove—a sea-shell chest—will appear before you.

There are six Abyssal Geysers on Summerset.