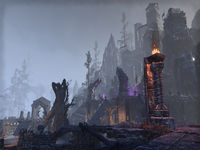 Mor Khazgur is an Orc stronghold in the far northwest of Skyrim. It is a battleground available that was added in Update 17, together with Deeping Drome.

It was shown in the Dragon Bones and Update 17 Preview described as "already [having been] at the center of countless Second Era conflicts, and right now, perhaps fittingly, it is the setting for particularly vicious arena battles."[1]

This Elder Scrolls Online-related article is a stub. You can help by expanding it.
Retrieved from "https://en.uesp.net/w/index.php?title=Online:Mor_Khazgur_(battleground)&oldid=2371764"