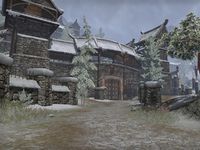 The Northern Morrowind Gate is a border keep in northeastern Cyrodiil, far northeast of the Imperial City. It is controlled by the Ebonheart Pact. It is connected via the Transitus Network to Fort Dragonclaw, Kingscrest Keep, and the Southern Morrowind Gate. It is one of the two main bases of operation for the Pact. The Scroll Temple of Chim lies south of the garrison. 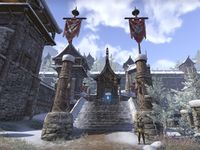 The Transitus Shrine is located in the center of the garrison. Vother Herendas guards it, and can tell you about how the Transitus Network functions. Olvyia Indaram is busy doing paperwork in front of the northern gate. The stage for Midyear Mayhem is located in the street southeast of the Transitus Shrine. Pelinal's devoted come here to bless soldiers during Midyear Mayhem. After you complete the event quest, the Basin of Gore Virtuous can be used at any time (while the Midyear Mayhem event is active) to grant you Pelinal's Ferocity for a 100% Alliance Point gain boost. A copy of The Song of Pelinal, Volume 10 is located atop an upside-down crate on Sacerdote Aloisia stage. Grand Warlord Zimmeron's camp is located west of the gate. There is a cooking fire behind the Grand Warlord. Captain Rythe and a dog named Link stand near him, and Those Who Stood at Chalman Keep lies on the table in front of him. A letter addressed to the warlord is on the table in his tent, near the map with the dagger sticking out of it. A copy of Subtropical Cyrodiil: A Speculation is sitting in a chair in the back of the tent.

The Mission Boards are located east of the front gate. General Dar-Liurz is in charge of the Scouting and Bounty Missions, located on the north side of their fenced in circle. A letter from the Grand Warlord to Dar-Liurz is sitting in the snow on the other side of the short stone wall behind the General. Sheogorath is standing next to the Bounty Mission Board, waiting to teach you about using Volendrung on the battlefield. When you complete his quest, a portal to Cheesemonger's Hollow opens indefinitely where he was standing. General Jeggord is standing across from Dar-Liurz. He handles the Warfront and Battle Missions. Additionally, the Conquest Mission Board is located next to the Battle Mission Board. A letter addressed to General Jeggord is sitting in the snow behind him.

A large Nord-style tent is located northeast of the Merchant House. There is a cooking fire, a chair and a few crates in front of it. If you pass the fence north of this camp, you'll find a circle of Argonian-style tents propped around a large bonfire in front of a structure composed of mud and felled trees. Several soldiers are keeping warm here. Heading up the road east past the well brings you to a circle of Dark Elf-style tents around a cooking fire, where the Mercenary Merchant used to reside. The dirt path leading north from here brings you to a small archery range where two soldiers are practicing their shots.

The lake located south of the siege range

A high wall separates Northern Morrowind Gate from the rest of the wilderness protected by the Gate of Chim. Several doors will lead you outside this interior wall. If you head straight south off the path leading away from the central door, you'll find the charred remains of a wooden house.

The Pact's siege range is located outside the garrison's walls, to the east. A door at the eastern end of the gate's outer wall will take you directly outside this snowy valley, which has been charred by firebombs from soldiers practicing their aim. A Nord-style stone bridge arcs over the range's southern entrance. The scenic trail headed southeast leads to the shores of a massive, icy lake. The mountains southeast of the lake separate the northern half of the Ebonheart Pact's territory from the southern half. At the southern end of the lake, the water runs north, spilling down the cliffside by the southern road leading to the Scroll Temple. A massive bridge crosses over these falls and overlooks a location where Volendrung can spawn. Golden Saints guard this area, which lies amid the lake. Stumps left over from trees which have been felled for lumber dot the icy shore. 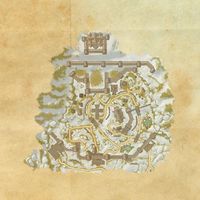 A map of Northern Morrowind Gate