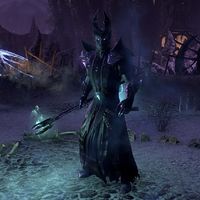 Voriak Solkyn is the final boss of the Maelstrom Arena, fought in the ninth round, the Theater of Despair.

As a boss type enemy, Voriak Solkyn is immune to all crowd control effects except the Spectral Explosion synergy which can be used after you collect three golden wraiths.

This phase remains until the boss is brought down to 70% health.

At 70% health, the boss teleports above the arena and is invulnerable. The player needs to destroy three animus crystals above to bring him back down.

Summon Clannfear
An electric clannfear will spawn and needs to be killed near one of the glowing pads around the arena. This will activate a portal that brings the player up to the upper platform where the animus crystals can be attacked.
Necrotic Stab
This attack will be continuously used on the player by the boss if they remain below.
Summon Crematorial Guard
Crematorial Guards will spawn below if the player remains below (or falls off the top platform). They will need to be killed as soon as possible just like before.

While above and destroying the crystals, players will need to look out for the following attacks.

Soul Churn
The boss deals constant unavoidable magical damage over time that increases gradually. Dropping off the platform will reset the damage down, players may choose to do this if the damage above becomes unbearable.
Soul Discharge
After the first crystal is destroyed, the boss starts channeling a spell and rotating rock walls will appear around him. Players will need to hide behind the walls to avoid getting damaged and blown off the platform when the spell completes.
Necrotic Blast
The attack from before is repeated here, players must block or dodge the attack to avoid getting knocked off the platform.
Comet Strike
Fireballs will land on the platform on the player's position dealing high flame damage and stunning them as indicated by red circles. Players should try to avoid this if possible.

Once all three crystals are destroyed, the player is knocked down again and the fight continues. The attacks from the first phase repeat with some new mechanics.

Summon Dremora Narkynaz
Some Dremora Narkynaz will spawn and walk towards the middle where they will channel a summoning ritual. Players should kill them immediately to avoid spawning a Bone Colossus that will make the boss fight much harder.
Summon Golden Wraiths
The boss will spawn golden wraiths from before and try to absorb them. If the boss absorbs three golden wraiths, he will cast a much stronger version of Soul Churn that deals very high magical damage over time that is almost impossible to survive. To prevent this, players will need to intercept these wraiths and use the Spectral Explosion synergy provided to stun the boss and finish him off.

"After I kill you, I shall animate your corpse!"
"I summon your death!"
"You are just a pest to be swatted away!"
"That just makes me even angrier!"
"Stupid mortal! That won't stop me!"
"Enough play! Time to end this game."
"Now I shall reveal my true power!"
"This will finish you!"
"I win! I always win."

Once he teleports above:

"Behold my lovely roiling cloud! I shall await you there."

Once the Animus Crystals on the upper platform are destroyed:

"Now for the final phase. Watch as I absorb all the power I need!"

After wiping and resurrecting:

"You can die. We Daedra cannot!"