Online:She Who Eats the Light

< Elder Scrolls Online: Quests: Murkmire / Side Quests
The Teeth of Sithis, a pair of ancient xanmeer temples, has been overtaken by the servants of its heretical, former high priestess, Shuxaltsei. She has taken the custodians of the Teeth captive and is sacrificing them in some profane blood rite.

As you walk by the Teeth of Sithis delve, you'll come across Nisswo Xode, who warns you to stay back.

"You are not one of her thralls? No, you do not smell like them.
Quickly, you must help me! I only barely escaped her clutches, but my root-sisters and brothers were not so lucky. Every moment we delay will be measured in innocent blood."
Who is it you escaped from?
"Shuxaltsei. Devours-the-Sun. High-Priestess of the Teeth. She has many names, all of them spoken softly.
She has returned from dusk to reclaim her temple and we are the offerings she makes for Sithis's favor."
Some sort of sacrifice?
"Yes. What blood she does not drink is spilled on the altars of the temple. For what purpose, I do not know, but many have died for the sake of her terrible rituals.
Shuxaltsei must be stopped."
Very well. I'll put a stop to these sacrifices.
"The priestess holds them in the Teeth of Sithis. Use the tunnel beneath the waterfall to reach the xanmeers on the ridge above.
We will regroup at the top of the western xanmeer once you've found the others." 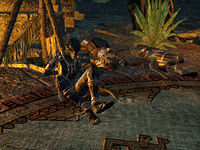 Once you enter the xanmeer proper, be prepared to deal with various Sun-Eater vampires, carnivorous plants and traps. The trapped floor tiles will be highlighted when you crouch and go into stealth. Navigate the western xanmeer to find the first captive, Nisswo Dakee-Kai.

"You come to drain the sap from me again, but I have little left to offer your master.
When the last of us are bled dry, it will be you who quenches her endless thirst."
I'm here to rescue you. Xode sent me.
"It does not matter. We are too entangled in the rotting roots of our past to flee from it. They have spread far and wide, unnoticed beneath the surface, and now that they have broken into the light it is too late.
So, what would you have me do?"
Meet Xode on top of the western xanmeer. We'll decide our next move from there.

Continue on and find the next captive, Nisswo Nedhellas, who can be found on the upper platform within the chamber.

"Can't get enough of this fine vintage, eh? Well, you're cut off! Come any closer and I'll bash your fangs in!"
Easy. I'm here to rescue you. Xode sent me.
"He got out? Slippery skink, that one. Well, what are you waiting for? Set me loose, so I can give these bloodsuckers a good thunk right in their pointy teeth!"
You're in no condition to pick a fight. Find Xode, he should be at the top of the western xanmeer. 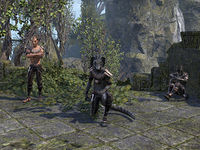 Meet up with the survivors.

As these are the only living captives you can find, head to the top of the western Xanmeer to meet up with the survivors. Talk to Nisswo Xode.

"I am grateful the Hist has guided you all to me, but … is this everyone you were able to find?"
Yes, so far.
"So far. Yes ….
I found nothing in the eastern xanmeer but the priestess's thralls and the reek of mingling blood. Whoever was there has already been taken to bleed on the temple's teeth, or her own."
So we're too late.
"She will find others. Before the fall, Shuxaltsei drenched the Teeth of Sithis with sacrificial blood from dawn to dusk. As the thing she has become, her need is greater now and so is her power. I can feel it coursing through this temple."
How so?
"Like the blood spilled here begins to pulse through dead stone. The beating of this temple's heart is slow, but it echoes through the Void. She is calling to Sithis. We cannot let her be heard."
I'll stop her.
"I fear what Shuxaltsei has begun may not be undone by her death alone. We must stop her ritual and forever silence this temple to the old ways. Destroy the altars. Only then can we be certain the high priestess will not get what she wants." 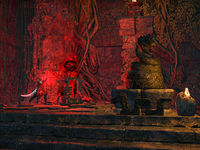 Cross the bridge and enter the eastern xanmeer. There are two sacrificial altars which will need to be destroyed, but they are in the same chamber. Once the ritual altars are destroyed, it's time to put an end to Shuxaltsei herself. Descend into the caverns below the eastern xanmeer and fight your way to the high priestess. As you approach, the ground will shake as she continues her ritual. You will find her summoning a Hemonculous and chanting to Sithis.

In combat she displays a mix of Fear Mage abilities as well as a host of blood-related spells unique to her. Once she is dead, you can leave the xanmeer through a door to the south of Shuxaltsei's chamber. Once outside, you will be on one of the step levels of the xanmeer and you can jump down to meet up with the Nisswos who will be discussing what they should do next.

You can then speak with Nisswo Xode to tell him of your success:

"The temple seems quieter and the spines of fear and dread lie flat again. It is done, isn't it?"
I destroyed the sacrificial altars and put an end to the high priestess.
"Then the last remnants of the old ways have finally been shed and the story of Shuxaltsei ends as it was always meant to: with a new beginning.
We are grateful for your help. The Hist were wise to guide you to us."

Notes
* Any text displayed in angle brackets (e.g., <Alias=LocationHold>) is dynamically set by the game and will be filled in with the appropriate word(s) when seen in game.

This Elder Scrolls Online-related article is a stub. You can help by expanding it.
Retrieved from "https://en.uesp.net/w/index.php?title=Online:She_Who_Eats_the_Light&oldid=2284145"