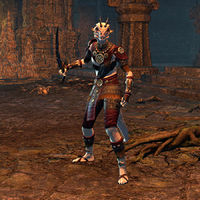 Shuxaltsei is an ancient Argonian priestess who opposed Duskfall and sought to maintain traditional Argonian worship of Sithis through blood sacrifice. She has since become a powerful vampire and was seemingly awakened somewhere beneath Blackrose Prison. Shuxaltsei has taken control of the Teeth of Sithis, an ancient temple to Sithis, and plans to make blood sacrifice to call upon Sithis and return all of Creation to the Void.

Defeating her is required to mark the delve as cleared and is also required as part of the related quest.

She has a chance to drop the Charm of the Shapeless antiquity lead for the Ring of the Wild Hunt.

She may occasionally say something in jel while summoning two Blackguard Bloodfiends.