< Lore: Linguistics
"Much of the nuance of Argonian conversation blooms from heavy metaphor and subtle body movements."
—Lights-the-Way, Mystic of the Mages Guild[1] 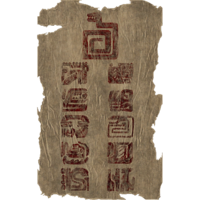 Symbols that may represent words in Jel

Jel is the native language of the Argonians. Jel originates from the ancient and intelligent Hist trees of Black Marsh. The Argonian Mere-Glim claimed that Jel was the "closest speech to thought", and that other races could not pronounce it well enough to freely converse with it.[2] Nevertheless, Annaïg Hoïnart, a Breton, was able to learn enough Jel words to create a sort of pidgin language to converse with Mere-Glim.[2]

The unintelligibility of Jel to other races is satirically alluded to in The Madness of Pelagius: "It was said that when the Argonian ambassador from Blackrose came to court, Pelagius insisted on speaking in all grunts and squeaks, as that was the Argonian's natural language."

There are no Jel words to describe any Daedra. As explained by a native speaker during the Interregnum, the Argonians do not "taint their language with words for abominations from Oblivion". Instead, they use common words from other more widely-spoken languages to refer to the beasts.[3]

"Mere-Glim wondered what would happen if he died. It was generally believed that Argonians had been given their souls by the Hist, and when one died, one's soul returned to them, to be incarnated once more. That seemed reasonable enough, under ordinary circumstances. In the deepest parts of his dreams or profound thinking were images, scents, tastes that the part of him that was sentient could not remember experiencing. The concept the Imperials called "time" did not even have a word in his native language. In fact, the hardest part of learning the language of the Imperials was that they made their verbs different to indicate when something happened, as if the most important thing in the world was to establish a linear sequence of events, as if doing so somehow explained things better than holistic apprehension."—The Infernal City

Jel completely lacks tense, and Argonians generally view all of life from birth to death as a single moment.[2] Time is much more fluid to the Saxhleel.[4] To them, time is an illusion established to create a linear version of events and is therefore considered a limited way of perceiving reality. In fact, the hardest challenge for Argonians learning other languages is getting used to the presence of past-tense and future-tense verbs.[2] It's not that the Argonians have no concept of time at all, they simply view time differently from the other races.[4]

"Words hammered thought into shape, put it in cages, bound it in chains. Jel, the tongue of his ancestors—was the closest speech to real thought...
—The Infernal City:33

"My tail whips from side to side, and yet you wish speak? Speak then." — Ereel-Jush, storyteller of Naga-Kur

Much of the Argonian language also relies on non-verbal communication or "body language" to convey meaning, which may be lost in translation for those unaccustomed to the Argonian's way of speaking. This difficulty in comprehension also goes in the other direction, where an inexperienced Argonian may have difficulty interpreting the emotions of an outsider.[5] This mutual inability to decipher body language may be why Argonians speaking Tamrielic will often preface their statements with an emotional qualifier, seen most often in the form of "I erect the spine of ...".

The use of body language in communication becomes more prevalent in the more isolated Argonian tribes who have had little contact with the other races of Tamriel. An example is the Naga-Kur tribe, their representatives often consider it necessary to specify their non-verbal gestures as they speak with outsiders, though other Argonians can interpret them well enough.[6]

G in the beginning of a word is pronounced as a voiced velar plosive, as in "ground" — geeva /gi:va/.

X in most cases will be pronounced as [z] — xanmeer /zanmi:r/

H when set before an "l" serves as a connective voiceless consonant that is vocalized by Argonians on the breath-out. Known uses of "hl" in such a way exists in the word "Saxhleel", and tribe names utilizing the word "leel", such as "Su-Zahleel". — Su-Zahleel /su:zahli:l/.

Compound words are common in Jel, generally consisting of an adjective and a noun or two nouns. Example:

Some compounds are written with hyphens. It is unknown if there is any semantic difference between these and other compounds. Example:

This section contains known Jel words and their meanings.