Elven alphabets are a family of related writing systems employed by several elven languages, such as Ayleidoon, High Elvish, Dwemeris, or Falmer language. The above chart lists all characters with known transliterations. The translations are taken from a combination of in-game data files (Falmer, Skyrim Dwemer), fan translations based on provided Latin alphabet equivalent (Ayleid, Wormgod Dwemer, Altmer), and a piece of Redguard-era concept art (Morrowind Dwemer)[UOL 1].

More characters exist in the Dwemer books Divine Metaphysics and The Egg of Time, but these have yet to be translated. (There is strong reason to believe that these books contain just random characters, and do not actually have any meaningful text.)

An Ayleid inscription which reads "Av latta magicka, av molag anyammis", which translates to: "From light, magic; from fire, life".

There are few examples of elven inscriptions for which there are confirmed translations at this time. The example on the left is an Ayleid inscription from a ruin in Oblivion. It reads:

or "Av latta magicka, av molag anyammis", which translates to: "From light, magic; from fire, life". This is a reversal (perhaps unintentional) of the phrase translated in the book: Ayleid Reference Text: "From fire, life; from light, magic." The double 'm' in "anyammis" has been truncated to a single 'm', and the 's' is too obscured to see on this inscription, but otherwise, it is clearly the same text.

A Dwemer pipe which reads "Wormgod" in Dwemer runes.

Another confirmed example of elven text is to the right. This inscription appears on all of the pipes inside Dwemer ruins in Morrowind. It reads simply

or "Wormgod", which was the nickname of Gary Noonan, one of the developers at Bethesda. Interesting to note is that unlike the Daedric language, this one features (minimal) punctuation. The dot underneath the last letter is probably not part of the letter, but rather an indicator of the end of the word. (Since it is repeated over and over again on the pipes.) 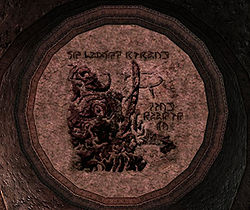 A third known example is a tribute by Gary Noonan to his father placed on a door in Morrowind, shown right. The text reads:

Which translates to: "In loving memory, Gary Noonan, Sr." 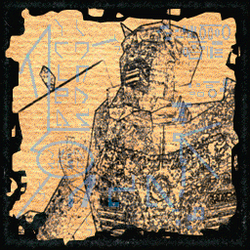 A Dwemer banner from Redguard.

The banner on the left can be found in Redguard. If you look closely, you'll see text written in blue color over the image. It's hard to read in places, but you can make out the following characters:

And lower down, you'll see:

The significance of these remains unknown at this time. Since each group of characters is in consecutive alphabetical order, it seems likely that it's simply an alphabet. 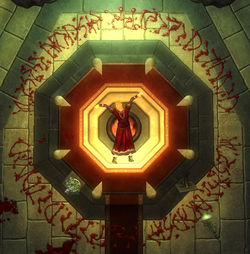 Ayleid writing in the Chapel of Dibella.

Another example can be found in the official Knights of the Nine Official Plug-in. At the beginning of the quest Pilgrimage the player finds an Ayleid text written on the floor of the Anvil chapel. This text reads

which translates to As oiobala Umarile, Ehlnada racuvar. According to the prophet this means: By the eternal power of Umaril, the mortal gods shall be cast down.

This text can also be found on the side of the Knights of the Nine box.

A stone which translates both Dwemeris and the Falmer language.

In Skyrim, a stone which supposedly translates both Dwemeris as well as the Falmer language can be found in Calcelmo's Tower. This is the longest Dwemeris transcription yet found, although no translation is provided. It does share some words with other languages, such as "Mer", suggesting a commonality of some sort. The Dwemeris inscription transliterates into: 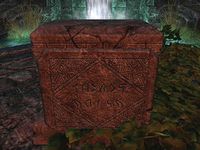 An inscription is found on several altars in Honor's Rest. If mirrored it is clear that it reads:

, or "DIVINE STARS". The same inscription can also be found on the Gray Menhir in Upper Craglorn. 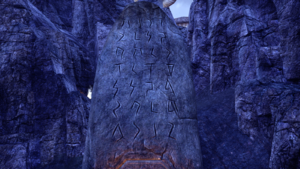 In ESO several Elven letters are carved into Khajiiti shrines found in Sathram Plantation and Do'Krin Monastery. It reads 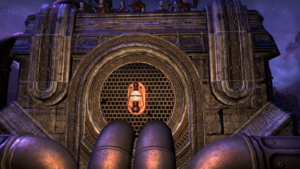 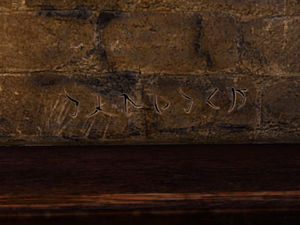 Altmer script on a wall

An Altmer inscription can be seen on a wall of Tarnamir's manor during the quest Old Wounds in ESO. It reads "ELUVEIN", which is a name of a species of owl that abandons its eggs after laying them, and is also used by the Altmer to describe cold-hearted people. 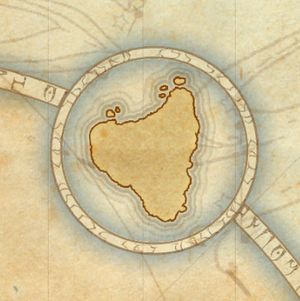 Analysis of the books is inconclusive at this time. According to Douglas Goodall, one of the game's developers, they are just random characters.[1] Additionally, certain passages are repeated verbatim, but in a different order, from one book to the next, or even on both pages of the same book. This smacks of copy/pasting by the artist who created the graphics for the pages. Also, substituting the known letters for their English counterparts does not reveal even a hint of readable text. If it's a cypher, it's not a simple one, because several different characters can be seen as single-letter words, whereas in a typical English-language cypher, you would only see two - 'A' and 'I'. A more complex cypher is still a possibility, but without knowing the key, or even the meanings of half of the letters, it would be quite a difficult task to decode it, assuming there is anything to decode.

The Egg of TimeEdit