Nereids are mer-like, feminine water creatures that can often be heard singing. They are able to use several water spells as attacks. 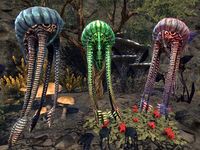 Calves from the various breeds of netch (from left to right: common netch, mossy netch, and rosy netch)

Netch (or netches) are large and generally peaceful creatures native to Morrowind that resemble airborne jellyfish with the size and disposition of cattle, floating through the air supported by internal sacks of magical gases. The barbs on a netch's tentacles contain active nematocysts, making them deadly if provoked. Adolescent netches are called calves or netchlings and resemble female ("betty") netches. Male ("bull") netches are larger than female ("betty") netches, the latter can be provoked into aggression more easily. They are usually peaceful but can be defensive of their territory, particularly during breeding season. When betty netches and calves feel threatened, they secrete pheromone oils that drive bull netches mad, turning them aggressive. 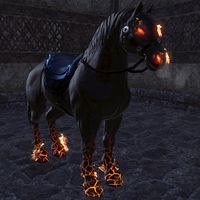 The Nightmare Courser is a Daedra that takes the form of a black, flame-wreathed horse. Many conflicting legends surround its mysterious origins, although it is associated with Mehrunes Dagon. It is sometimes used by mortals as a mount, although its chaotic temperament makes this a difficult task. Although superficially similar in appearance, the Courser bears no relation to the Hell Hound.[1]

Nix-hounds are medium-sized bloodsucking insectoid predators that are native to Morrowind, as well as having migrated to Solstheim by the Fourth Era as a result of the Red Year. They are considered distant relatives of nix-oxen and kwama.

When young nix-hounds emerge from their chrysalis, they can immediately drain up to four similar sized prey a day using their proboscis. They have been noted as being very opportunistic whilst searching for food, easily killing small animals and children even whilst at this early development stage. Adult wild nix-hounds are aggressive pack-hunters, with many men and mer meeting their end from an unsuspected ambush. Nix-hounds sustain themselves by draining prey of bodily fluids, leaving behind a 'meat-husk' that other creatures such as alits will eat. Common prey include baby guars, goats, kwama pupae and ash hoppers. 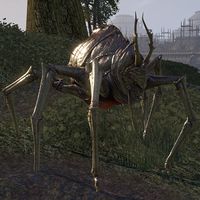 Nix-Oxen are insectoid creatures that were found on the island of Vvardenfell. By the late Third Era, the Ash Blight had wiped out Nix-Oxen from Vvardenfell.[2]

A nimble and passive humanoid insect commonly found in the Gold Coast region of Cyrodiil and on the islands of Summerset and Vvardenfell. 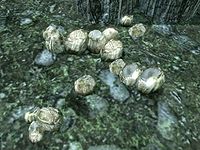 A species of barnacles found in the waters of Skyrim.

Anumidium, as seen in Divine Metaphysics

Numidium (or Anumidium), also known as the Brass God, the Prime Gestalt, the Brass Tower, Walk-Brass, and Big Walker, was a gigantic golem of Dwemer origin. Numidium was constructed by Tonal Architect Lord Kagrenac to be a new god, powered by the Heart of Lorkhan, to retake Resdayn from the Chimer and make the Dwemer race immortal. The Dwemer disappeared from Tamriel before Numidium could be activated, though their disappearance is possibly directly related to this endeavor.

Numidium was, in practice, a weapon of devastating power; it was used by Emperor Tiber Septim to complete his conquest of Tamriel at the end of the Second Era, but was destroyed afterward. The golem was rebuilt and reactivated centuries later, and became the center of the phenomenon known as the Warp in the West, after which it was destroyed again. A second Numidium, Akulakhan, was partially constructed by Dagoth Ur a few years later. However, the destruction of Kagrenac's enchantments on the Heart of Lorkhan prevented its activation.

A beautiful creature, but not without its danger. Nymphs require silver or better weapons to be harmed, have some inherent magical abilities, and drain their opponents' fatigue in addition to health. Nymphs have their own melodious tongue, which sounds similar to Ayleidoon and faerie but shares none of the vocabulary.