This article is about the island. For the island's central volcano, also known as Vvardenfell, see Red Mountain.

Vvardenfell, also called the Black Isle,[1] is a large island located inside the bay-like Inner Sea, and is surrounded by mainland Morrowind with the exception of its northern coast, which meets the Sea of Ghosts. The island is dominated by the great volcano, Red Mountain. The island itself is named after the original Dwemeri name of Red Mountain, literally translating to "City of the Strong Shield".[2] It is characterized by arid wastes, rocky highlands and coastal wetlands filled with unusual and unique flora and fauna. Red Mountain’s lava flows, eruptions, and ash-fall cause Vvardenfell’s landscape to undergo a constant cycle of death and rebirth. The soil becomes greatly fertilized thanks to the volcanic activity, and new plants and fungi emerge from the cooling ashes. It also causes the island to expand as the lava hardens.[3] The corruption of Dagoth Ur’s Ash Blight would have a dramatic effect on the environment and its inhabitants. By the late Third Era, Vvardenfell was noticeably less vibrant, and Cliff Striders, Nix-Oxen, and Vvardvarks were wiped out.[4] During the Red Year of 4E 5, Vvardenfell was devastated after the Ministry of Truth crashed into the city of Vivec, causing Red Mountain to erupt. Most of the island was covered in ash, forcing much of the population to evacuate.[5]

Originally, Vvardenfell was geographically connected to the mainland. The Inner Sea was created after the giant volcano Red Mountain erupted and some of the landmass of Vvardenfell sank lower than sea level. The resulting crater was filled by the icy waters of the Sea of Ghosts, cooling the lava over time. Some reports place this event after the War of the First Council in 1E 668, referred to in the tales of numerous races—to the Nords it was The Year of Winter in Summer, to the Khajiit, Sun's Death. However, there are conflicting reports stating that there might have been earlier eruptions creating this change in landscape.[6] Vivec's Sermons attribute the Numidium to the creation of the Inner Sea.[7]

During the time of the Nord Conquest, a Dwemer kingdom ruled in northern Morrowind in the region of Red Mountain on the island of Vvardenfell. The steadfastness and unity of the Dwemeri allowed them to remain embedded in the region compared to the divided and feuding Chimer clans, and the kingdom remained independent when the rest of Morrowind ultimately fell to the Nords.[2]

Before she was married to Emperor Pelagius Septim III, Katariah was the Duchess of Vvardenfell.[8] She was also the heiress to the noble family, the Ra'athim Clan of Ebonheart.[9]

During the Imperial Simulacrum in the late Third Era, Vvardenfell was open to the rest of the Third Empire and contained three known settlements; Markgran Forest, Old Run, and Stoneforest.[10] After he banished Emperor Uriel Septim VII, the battlemage, Jagar Tharn broke the Staff of Chaos into seven pieces and placed one of them in Dagoth-Ur, the dwarven mines underneath Red Mountain. Sometime later, the Eternal Champion retrieved the Hammer of Gharen for the King of Ebonheart, who then struck it on the Anvil of Mithas and revealed the mines' location. The Champion then traveled to the island and acquired their last piece to assemble the staff.[11]

Previously a Temple preserve under Imperial protection, Vvardenfell Territory was reorganized in 3E 414 as an Imperial Provincial District. It was one of six Imperial administrative districts of the Morrowind province. Vvardenfell had been maintained as a preserve administrated by the Temple since the Treaty of the Armistice in 2E 896, and except for the independent Ashlander tribes and a few Great House settlements sanctioned by the Temple, Vvardenfell was previously undeveloped.[citation needed] The region was host to large populations before the War of the First Council; few remained by the time of the reorganization, perhaps due to the Blight. When the centuries-old Temple ban on trade and settlement of Vvardenfell was revoked by King Llethan of Morrowind, a flood of Imperial colonists and Great House Dunmer came to Vvardenfell, expanding old settlements and building new ones.[citation needed]

The new District was divided into Redoran, Hlaalu, Telvanni, and Temple Districts, each separately administered by local House Councils or Temple Priesthoods, and all under the advice and consent of Vedam Dren and the District Council in Ebonheart.[citation needed]

In the absence of Vivec, the Ministry of Truth became unstable. The Dunmer Vuhon created a device known as The Ingenium that kept the Ministry of Truth floating over the city of Vivec by consuming souls. While only undesirables and criminals were originally used, eventually it used souls which could continue to feed the Ingenium without causing immediate death. When the Dunmer woman Ilzheven was taken to power the machine, her former lover Sul rescued her from the machine. This caused the Ministry of Truth to crash into the city of Vivec, which led to Red Mountain erupting. The eruption led to most of the island being covered in ash, leading to a mass exodus to the nearby island of Solstheim.[12]

Following the Imperial reorganization, Vvardenfell was ruled by the Grand Council in Ebonheart, which consisted of representatives from the main powers present on Vvardenfell: The three Great Houses Hlaalu, Redoran and Telvanni, the Tribunal Temple, the Imperial Commission and the Imperial Magistrate. Duke Vedam Dren of House Hlaalu was the head of the council, representative of the Emperor and leader of the Vvardenfell district.[citation needed]

Local law became a mixture of House Law and Imperial Law in House Districts, jointly enforced by House guards and Legion guards, with Temple law and Imperial law enforced in the Temple district by Ordinators. The Temple was still recognized as the majority religion, but some Dunmer such as the Ashlanders worship some Daedra, and worship of the Nine Divines was protected by the legions and encouraged by Imperial cult missions.[citation needed]

Imports and exports are tightly controlled by the East Empire Company, which deals largely with Imperial-friendly House Hlaalu. The company mines raw ebony and glass on the island. It holds exclusive charters on these items and most other native commodities, such as local spirits and agricultural products. Outside these official channels, the Empire forbids the trading of moon sugar, Skooma, and Dwemer artifacts. As such, smuggling is big business. Slavery is legal in Morrowind, and House Dres competes with smugglers to supply the market with forced labor.[citation needed] 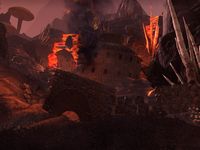 A foyada in the Molag Amur region

Foyadas, or fire-rivers in the native Ashlander language, are deep, ash-dark ravines which run down from the Red Mountain volcano on Vvardenfell.[citation needed] The lava from Red Mountain is very fluid and runs almost like water. During an eruption, lava pours down the mountainside and leaves the area bare of all vegetation. Once a Foyada is created, the chance of a new one lessens, as the lava will normally run down the existing one. They are a good alternative to roads when heading towards the rugged mountain, as they have good footing, are clear of brush, and run for long distances.[citation needed]

Foyada Mamaea is one of the largest foyadas running down the slopes of Red Mountain. It runs from the southern lip of the crater of the volcano through Ghostgate, which is built in the center of the Foyada, then generally south-southwest, past Moonmoth Legion Fort before finally ending a bit east of Hla Oad.[citation needed]

Native to Vvardenfell since the First Era are the dark-skinned, red-eyed Dunmer (known as the Chimer ages ago), which make about half of the population. The other half are divided roughly equally among the other nine Races of Tamriel. Inhabitants of Vvardenfell include members of three of the five Great Houses, Velothi commoners, nomadic Ashlanders and members of the Tribunal Temple, to which all wilderness areas ostensibly belong. Outlanders are not particularly welcome, especially in Telvanni-controlled areas. The Imperial Legion and Imperial guilds are well established though and accept foreigners openly. House Hlaalu is also rather welcoming to them, as evidenced by their two non-Dunmer Councilors.[citation needed]

Vvardenfell seen from Stonefalls circa 2E 582

Dunmer inhabitants of Vvardenfell have a keenly-developed sense of identity, as they live in a sacred place that has been host to many of the defining moments in Dunmeri history. The common people regard themselves as servants of the Living Gods and the heirs of the Velothi movement.[citation needed] Saint Veloth is credited with bringing the Chimer and by extension, the Dunmer to their proper place in the world. Daedra worship has long-since fallen out of favor with most of the population, but it still holds a valued place in culture and tradition, as the Tribunal are regarded as either complementing or amicably replacing the worship of the Lords of Misrule.[citation needed]

Despite the decline in their worship, many species of Daedra, ranging from the bestial Clannfear and Daedroths to the sentient Dremora and Golden Saints, are a common sight on the island. These Daedra are usually found lurking among the ruins of Daedric shrines or in Vvardenfell's wilderness and tend to attack approaching mortals on sight. Summoned Daedra were also utilized by the Temple for ritualistic purposes, and by high-ranking members of the Great Houses (particularly of House Telvanni) as security.[citation needed]

Central to the psyche of the Vvardenfell Dunmer is Red Mountain, whose geography and silhouette dominates the region. Constant storms dictate the course of everyday life and give the different environments their distinctive characters. The volcano also keeps the island in a constant state of flux, as evidenced by old maps showing the entire island made up of Ashlands, lava rivers running to the sea, and accounts of ash falling onto the streets of the city of Vivec.[citation needed]

Inhabitants of Vvardenfell rely on beasts of burden, such as Guar or Silt Striders (giant insects), or make use of various seagoing vessels to transport people and cargo. Guild Guides provided by the Mages Guild can also provide transportation.[citation needed]

Since the early settlement of the Chimer people on Vvardenfell, ancestor and daedra worship was the most widespread religious belief, but since the rise of the Tribunal Temple, the worship of the Tribunes has become more widespread among the settled house dunmer. Vvardenfell became the location of the Pilgrimages of the Seven Graces and site of the living god Vivec's eponymous city.[citation needed]
When the Empire settled on Vvardenfell after it was opened to colonisation in 3E 414, it brought over the worship of the Nine Divines through the Imperial Cult, though the Temple remained the dominant religion among the native population.[citation needed]

The ashlanders of Vvardenfell had their own separate beliefs, shunning the Tribunal Temple in favor of traditional Velothi ancestor and daedra worship, along with the Nerevarine Cult. Before the Nerevarine prooved themselves to Vivec as the true reincarnation of Nerevar, the Temple's had used their Ordinators to persecute the Nerevarine Cult.[citation needed] Among some of the persecuted followers of the Nerevarine prophecies were the dissident priests, who were a sect of reformists who questioned the legitimacy of the Tribunal Temple.
The Ordinators of the Tribunal Temple also had an active role in hunting worshipers of the so-called Bad Daedra. Despite their persecution by the Temple, many cults devoted to the House of Troubles had many shrines and sites of worship throughout Vvardenfell, mostly located in daedric ruins in the wilderness. Despite the religious freedom the Empire had brought, the Temple had been given the right to persecute these heretics under the terms of the Armistice.[citation needed]

After Red Year and the fall of the Tribunal, the main focus of Morrowind religion has shifted back to daedra worship with the New Temple, revering the Reclamations (Boethiah, Azura, and Mephala), with the previous deprecated Tribunes demoted to the status of saints and heroes.[citation needed]

Since the destruction of Vivec City and Red Mountain's erruption on Vvardenfell, it's unknown if the island presents much spiritual significance anymore.[citation needed]

This Lore-related article is a stub. You can help by expanding it.
Retrieved from "https://en.uesp.net/w/index.php?title=Lore:Vvardenfell&oldid=2737928"