Diagram of Anumidium from Divine Metaphysics

You have probably not heard the fairy tale of Numidium, but you need to. The legend dates back to the earliest parts of the third era [sic]. Numidium was supposed to be a giant so big his hands could knock the moons from the sky. I do not recall from the stories whether Numidium was supposed to be good or bad, but the legends used to scare me as a child. The legends are, in fact, true. There was a Numidium, and, if situations continue, he will come again. — Anonymous

Numidium (or Anumidium),[1] also known as the Brass God, the Prime Gestalt,[UOL 1] NM,[2] the Brass Tower,[3] Walk-Brass,[4][UOL 2] Big Walker,[5][UOL 1] and Walking Star[6] was a colossal construct of Dwemer origin.[7] It was constructed by Dwemeri Tonal Architect Lord Kagrenac[8][9][10] to be a new god, powered by the Heart of Lorkhan, made to retake Resdayn from the Chimer[11] and make the Dwemer race immortal.[10] The Dwemer vanished from Tamriel before the Brass God could be activated, though their disappearance may be directly related to this endeavor.[10]

The Numidium was, in practice, a weapon of devastating power. A "thousand foot tall automaton, a golem or an atronach[nb 1] of sorts", it was used by Emperor Tiber Septim to complete his conquest of Tamriel at the end of the Second Era, but was destroyed afterward.[12] The golem was rebuilt and reactivated centuries later, and became the center of the phenomenon known as the Warp in the West, after which it was destroyed again.[7] Temporal distortions have accompanied each known use of the Numidium,[5] to the point that the Warp in the West is sometimes known as the "Second Numidian Effect".[13]

A second Numidium, Akulakhan, was partially constructed in Morrowind in the late Third Era by Dagoth Ur. However, the destruction of Kagrenac's enchantments on the Heart of Lorkhan in 3E 427 prevented its activation.[14]

Around the time of the Alessian Slave Rebellion,[15] the Ayleid arch-mage Anumaril created the Staff of Towers, a powerful time-bending artifact composed of eight segments, each corresponding to one of the metaphysical Towers of Nirn. One of these fragments, a masterfully-crafted length of metal affixed to a hunk of polished brass, corresponded to Walk-Brass, despite the fact that the Tower did not yet exist. It is not known how Anumaril knew of its future construction.[4]

At some point by the early First Era, the Heart of Lorkhan was discovered beneath Red Mountain.[16] There are many differing stories about the series of events that followed, but most agree that the Dwemer High Craftlord Kagrenac[10] created a set of tools imbued with the power to forge mythopoeic enchantments,[10] which made it possible for their bearers to tap the Heart's power for themselves.[16] Kagrenac believed he could use his tools to create a new god, Anumidium, which would allow the Dwemer to transcend the Mundus.[9][10][UOL 1] Numidium was the vessel for this apotheosis.[1]

According to the legendary sermons of Vivec, Kagrenac summoned Numidum during the climax of the Battle of Red Mountain which caused great devastation to the Chimer armies and the land itself before finally being defeated by the combined might of Almsivi.[17]

Some among the Dwemer believed that tapping the Heart of Lorkhan posed unknown dangers and unjustifiable risks, but Kagrenac and his followers refuted these ideas.[10][18] It has been hypothesized that the War of the First Council may have led Kagrenac to carry out his experiments prematurely, and that the sudden disappearance of the Dwemer during the Battle of Red Mountain[11] was the result of one of these unknown risks. However, it is also speculated that their disappearance may have been the result of successfully granting the Dwemer eternal life, in some form.[10] Regardless of the circumstances, the Dwemer vanished from Nirn, leaving behind their creations. Kagrenac's tools fell into the possession of the Tribunal, who used them to tap the Heart of Lorkhan and make themselves into living gods.[14] 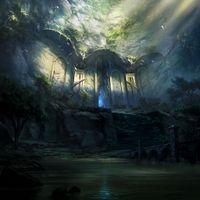 The Halls of Colossus

By the end of the Second Era, the Tribunal had possession of Numidium, while Tiber Septim had conquered most of Tamriel and was turning his attention to Morrowind.[19] However, in 2E 882 Dagoth Ur had returned and cut off the Tribunal's access to the Heart of Lorkhan, preventing them from restoring themselves with Kagrenac's tools.[20] Rather than fight in their weakened states, the Tribunes signed an Armistice with the Empire; as part of the treaty, the Empire received Numidium.[21]

Tiber Septim tasked Imperial Battlemage Zurin Arctus with the Numidium's repair.[19] There are rumors that the Emperor had the Halls of Colossus constructed in Elsweyr for this purpose, leaving the area still uninhabitable as a result[UOL 1]; there is overwhelming evidence the Halls have existed since the Merethic Era.[22] On the Emperor's orders, Arctus created the Totem of Tiber Septim, an artifact which allowed a bearer of royal lineage to control the Numidium. Since it would not function without the Heart of Lorkhan, he devised a replacement based on his research—a huge soul gem called the Mantella.[7] The gem required the life force, or "heart" of a powerful being, so Arctus used his own[12] (though it is also claimed he used the soul of Ysmir Wulfharth, an undead being who may have been a mortal avatar of Lorkhan).[19][UOL 3]

In 2E 896, the Numidium was activated near the city of Rimmen in Elsweyr[5] and proved very effective in bringing down the mighty Aldmeri Dominion of the Summerset Isles, thus completing Tiber Septim's conquest of Tamriel.[19] The official story says that after defeating all his enemies, Tiber Septim began using Numidium to destroy the neutral royal families of Tamriel so that he could enthrone persons he knew to be loyal. Zurin Arctus disagreed with these actions, and attempted to reclaim his heart from within the Mantella. In the ensuing battle, both the Battlemage and the construct were destroyed; the heart they shared was blown into Aetherius.[12] With the Mantella lost, Arctus couldn't truly die, and became an undead being known as the Underking.[7] The heretical version of events claims that Zurin Arctus had perished while trapping Wulfharth's soul, and soon after the conquest of the Summerset Isles an undead wizard (the Underking, but Wulfharth) appeared and destroyed the automaton.[19] The remains of Numidium were scattered throughout Tamriel.[7] 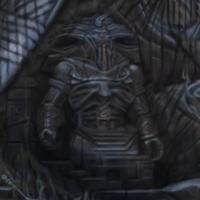 In the centuries that followed, the Blades were entrusted with the task of collecting the pieces of Numidium.[7] During the reign of Uriel Septim VII, Numidium's reconstruction was nearly completed, save for the Totem of Tiber Septim and the Mantella. Around 3E 401, both were located; the Mantella's resting place in Aetherius was divined, and the Totem was rediscovered in the Iliac Bay region. The latter discovery nearly set off a civil war among the dozens of independent city-states in the region, beginning with the murder of King Lysandus of Daggerfall. Ultimately, an agent of the Blades, sent by the Emperor, recovered the Totem. A bidding war ensued among the major powers of the region, and somehow seven of them ended up in simultaneous possession of the Totem. The agent then traveled to the Mantellan Crux in Aetherius to recover the Mantella.[7]

As a result, in 3E 417 each of the seven powers activated their own Numidium, and at least five Numiduma ravaged large areas of Hammerfell and High Rock. This event, known as the Warp in the West or the Miracle of Peace, greatly reshaped the political landscape of the Iliac Bay. It is believed the Underking reclaimed his heart from the Mantella, leading to Numidium's subsequent destruction.[5][7][23][UOL 1]

A similar golem known as Akulakhan, or the Second Numidium, was built by Dagoth Ur in the late Third Era, based on Kagrenac’s designs for Anumidium and powered by the Heart of Lorkhan. It was destroyed by the Nerevarine in 3E 427.[14]