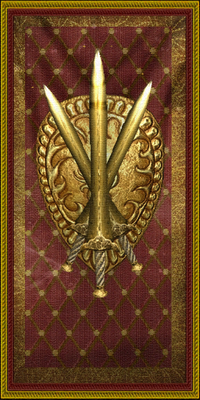 The banner of the Aureal in Shivering Isles

The Aureal (or Aureals), more commonly known as Golden Saints, are a Daedric race of golden-skinned winged[1] humanoids, with cat-like eyes and Elven-esque styled hair. They call themselves the Aureal, and claim to be the most loyal and honorable servants of the Daedric Prince Sheogorath.[2] The name Golden Saints was given to them by "lesser beings", and conveys an elegant and benevolent figure.[3] Furthermore, their use of golden avian-themed armor and weapons augments their angelic-like appearance. Despite their name and appearance, the Aureal are a proud, arrogant race, quick to anger and cruel in their punishment. They have little love for mortals, even those that inhabit the Shivering Isles, and make no effort to hide this in their interactions.[4][3]

They are a matriarchal society, tending to look down upon all males. Even male Golden Saints consider themselves and other males to be lesser. The Aureal have a warrior-like caste system with an eight-tier hierarchy, ascending from lowest to highest in rank as follows: Auren, Auredel, Aurmok, Aurmokel, Aurig, Malaurig, Pelaurig, and Aurmazl.[2] They make up one half of Sheogorath's army, along with the Mazken. The two groups have a great rivalry, each believing they are Sheogorath's favored. The Aureal are heavily linked to Mania, and act as its policemen. In times of war, they are placed under the command of the Duke of Mania.[2]

Their sacred home of Brellach lies in the northern part of Mania. Within it, the Wellspring of the Aureal serves as a beacon to guide the souls of the saints lost in the Void back to the Shivering Isles. Little is known of their chaotic creatia, but their Wellspring flows with a golden liquid fitting of the saints.[5] Some Golden Saints are also said to reside in the Colored Rooms.[4]

Amber that grows in the Root Systems of the Shivering Isles is linked to the Aureal, which may be used to summon or even bind them. The most powerful among the Aureal require the usage of the rare occurring Sheogorath-Shaped Amber.[6] Their hearts have modest magical properties.[1]

As a symbol of their devotion to Sheogorath, the Aureal engrave their golden teeth with the three faces of madness, a symbol of Sheogorath's office.[7] The average Saint is six feet tall.[8]

Crafting the avian-themed arms and armaments of the Aureal is a dangerous endeavor, as one can lose their mind making it. They are also an expensive craft, as they use gold metal as a base. As gold is far too soft on its own, multiple steps are required to strengthen them to be more nimble and harder than steel. The structure of the equipment is reinforced with refined moonstone, and then the gold is hammered into place while the gold is heated just below its melting point. Finally, a Daedra's Heart is put into the forge when the equipment is being heated, allowing them to be hammered into shape, and transforming the attributes of the metal, giving it an uncanny hardness.[9][10]

Despite the Aureal's animosity towards mortals, in an unspecified time, they took a mortal in as their own. Originally summoned to take the place of a mother who died as child birth, a Golden Saint functioned as the mother figure of a young Malkur Valos. After Malkur's father died in a mage duel, the Golden Saint was no longer bound to the conjuration spell. However, believing heavily in the steadfast principles of honor and duty, the committed Golden Saint took Malkur to the Shivering Isles to continue raising him there. Malkur began training there under the saints, gaining talent, honor, and innovation which would attract the likes of even Vanus Galerion. Thanks to their guidance, Malkur proved to be a valuable asset during the Mages Guild and Fighters Guild's invasion of Coldharbour in 2E 582. He even participated in the final assault on the Endless Stair, helping bring an end to the Planemeld.[11]

Due to his boredom from the Three Banners War lacking sufficient carnage, Sheogorath stole Volendrung from Malacath and sent it onto Cyrodiil, hoping the resulting chaos would bring him entertainment.[12] Golden Saints were chosen as the artifact's guardians, preventing the weak and unworthy from claiming it as a prize. [13]

One of the more notable golden saints is Staada, who is often sent into Tamriel to carry out important missions. In 3E 427, Sheogorath sent her to lead some of his other daedric servants to disturb a priestess of Azura on her secluded island in Sheogorad, but were banished by the Nerevarine.[14]

Circa 3E 433, Staada had become the stalwart commander of Brellach, but the Greymarch would lead the Aureal's home to be turned to ruin.nb1 The Wellspring of the Aureal was taken by Order, which turned the Aureal defenders to stone. Sheogorath sent his Champion to Brellach, where the hero was able to destroy the Order Crystals and rescue the Aureal. Staada would then lead the Aureal to remove any remnants of Order from their home, and would assume their normal duties afterwards.[5] The Champion earned their respect, and later their adoration when Jyggalag was freed from his curse and the Champion became the new Madgod.[5]