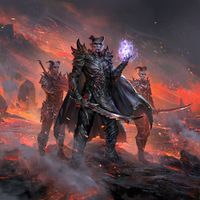 Dremora (also known as "The Kyn") are a warlike Daedric race primarily associated with the Daedric Prince of Destruction, Mehrunes Dagon.[1] They are often found in the service of other Daedra lords, such as Molag Bal.[2][3] They are commonly encountered throughout the planes of Oblivion.[4] Dremora are known to be highly intelligent beings, and make capable warriors and mages.[5]

The Dremora refer to their race as the Kyn (the People), with the adjectival form being Kynaz (of the Kyn).[1] They consider themselves to be above other Daedra,[6] who are seen as unthinking animals (the primary exception being the Daedric Princes).[1] They also show a mutual distaste for the mortal races of Nirn.[7] Despite this, Dremora are a surprisingly frequent sight in certain parts of Tamriel, roaming Daedric ruins[8] and the lairs of conjurers and Daedra worshipers.[9] They are also summoned to Tamriel through spells and rituals for durations of time that range from brief[10] to indefinite.[11] In this regard, they are often "employed" by Tamrielic organizations such as the Tribunal Temple to guard their shrines,[11][12] and by the Mages Guild to deliver messages to non-guild members.[13] Throughout the years, other professions that Dremora have pursued outside of being warriors for their clans include being mercenaries,[14] torturers,[15] taskmasters,[16][17] pirates,[18][19] butlers,[20] and merchants,[21][22] both in Oblivion and upon Nirn. They find Daedrats cute.[UOL 1]

The Dremora take pride in their hierarchies. Order is wrested from the chaos of Oblivion through force of will, and the Dremora are nothing if not willful. Rank and order signify glory to the Dremora, as maintaining such things exhibits strength of will.[3] It is their nature to serve those who exhibit a stronger will (such as Daedric Princes), and by serving such entities, the Dremora gain stature and reward. Oblivion is ever-changing, but the oaths held by the Dremora are eternal.[3] Confining oneself to a uniform code and upholding said guidelines is considered an act of supreme will and discipline.[6]

Dremora have keen memories and a tendency to hold grudges.[23] They also have a poor sense of direction.[23] They value their horns, and often refer to things that are shameful or dishonorable as "hornless".[23] The Dremora often serve as go-betweens for mortals who wish to make pacts with Daedric Princes or other powerful entities.[24] Dremora do not view themselves as "good" or "evil". In the case of those who serve a specific purpose for a powerful entity, they exist to serve that purpose. To the Dremora, this is not "good" or "evil", it simply is.[25] The Xivilai find the Dremora's fashion sense and mannerisms to be ostentatious.[6] On the other hand, the Xivkyn outright hold the Dremora in contempt, viewing them as "lesser creatures".[26] 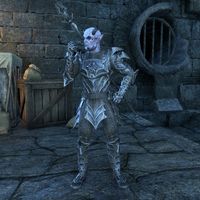 A blue-skinned Dremora, typically a servant of Molag Bal

Dremora are humanoid beings that resemble demon-like knights. In battle, Dremora have been known to wear spiked Daedric armor.[27][28][29] Notable features include horned faces that range from grotesque[30][2] to resembling tattooed Dunmer,[31] deep ashen grey,[32] blue,[33] purple or red[34] complexions, and voices that are deep, watery and guttural.[35] They can also vary widely in height, with some populations being similar to regular humans[36] while other groups stand as tall[37] or even taller than Altmer.[38] During war, some Dremora bear geometric tattoos or war paint that shows their commitment to victory over dishonor.[39]

The Dremora who serve Molag Bal typically have blue or grey skin and blue eyes, but they can vary widely in skin tone and eye color nonetheless.[40] For those who seek to oppose the minions of Molag Bal, these specific features are a dead giveaway.[40]

Dremora society is a class-based clan system that upholds values of oaths,[41] pride, honor and loyalty, both to the clan and to the Daedric lord they serve,[1][7] whom they also venerate as a god.[42][7] Dremora culture appears to focus on training and preparing for battle and war. Dremora warriors fall into one of eight known ranks, each more powerful and privileged than the rank below. These ranks are further distributed into melee, missile or mage classes. Dremora also make for ferocious combatants. This is not just because of their abilities as sorcerers and warriors, but also because, as creatures of Oblivion, they have no need to fear death.[43] Many dremora can reflect spells.[44] They craft and wear their own armor.[6][28][27]

Dremora hierarchy consists of eight major ranks: Varlet[2], Churl, Caitiff, Kynval, Kynreeve, Kynmarcher, Markynaz, and Valkynaz. The former four represent the military ranks of lesser soldiers. Varlets are the dregs of Dremora society, the lowest of the low and treated the worst out of the bottom four castes.[45] Churls are the untrained disorganized rabble that form the bulk of a clan's fighting force. They obey their superiors, but are cruel to mortals and other Daedra.[1] Caitiffs are shock troops, described as possessing uncalculating zeal. They are unreliable and undisciplined, but eager to perform.[1] Kynvals are the highest ranked of the lesser troops. They are warrior-knights who have distinguished themselves in combat and have displayed the potential to be future leaders of their clans.[1] The Kynval has been described as ambitious.[45] They are the highest of the soldier castes, and may be Caitiffs who have proven themselves in battle.[45]

The other four ranks are officer castes. They are the more important, politically-oriented roles.[1] Kynreeves are described as clan "officers" or "sheriffs", and are associated with fighting units or administrative offices.[1] They administer rewards and punishments to their warrior charges.[45] Kynmarchers are officers of Daedric citadels and outposts, and are the lowest of the ranks that are referred to as "lords".[45] A Kynmarcher's command is associated with a unit and a location or territory for which the officer is responsible.[1] The term Markynaz roughly translates to "grand duke". They form a council of other Dremora of their own standing, known as the "Markyn".[45][1]

The highest known rank is the Valkynaz, which is described as a "warrior duke". They are part of their respective Prince's personal guard or council collectively known as "the Valkyn", and are rarely encountered on Tamriel. A Valkynaz can generally be found beside their chosen Prince, and serve as commanders of important operations.[1] The Valkynaz associated with Molag Bal has the privilege of being granted a personal audience with the Daedric Prince, and can contact him whenever the need arises.[46] There are also many other ranks, such as Feydnaz, Kyngald and Narkynaz, whose positions in the overall hierarchy are largely unknown.[47] Dremora may rise or fall from a specific rank or move back and forth among clans, but these actions are regulated by complicated oaths and the will of the Prince said Dremora serves.[1][45]