This article is about the race. For the nation from which they originate, see Tsaesci (place). 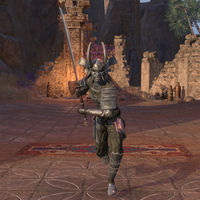 listen) say-she, /ˈseɪ.ə.si/ SAY-uh-see,[1] /ˈseɪ.tʃi/ say-chee,[UOL 1] or /ˈzi.ʃi/ zee-she)[UOL 2] which means Snake Palace, are a race originating from the continent of Akavir, east of Tamriel. While the racial status of the Tsaesci is ambiguous, with some sources claiming them as a human race[2] while others claim them as a race of beastfolk[3][4], all known encounters with Tsaesci show they are at least a race of humanoids, with some looking indistinguishable from humans. However, the possibility of Tsaesci being shapeshifters further increases the ambiguity of their status.[UOL 1]

Black hair is a known genetic trait of the Tsaesci[5], with some claiming them to also have scaly feet.[6] Sources which identify the Tsaesci as beastfolk attribute to them other physical traits such as tails, and describe them as having the bodies of "inverted gorgons".[3][7][Note 1] Adding to these contradictory claims, it is also claimed that the so-called serpent-folk apparently not only "ate" the men that lived on Akavir (although this statement can be interpreted in many ways), but also resemble them.[4][8][Note 2]

Although immortality is attributed to them in literature,[4] descendants of Tsaesci refugees in Elsweyr claim that longevity is not a trait of the race and speculate that the longevity of figures such as the Potentates had magical origins.[9]

Individuals with Tsaesci and Imperial ancestry are said to be barely indistinguishable from their pure Cyrodilic cousins, with the eyes and hair being the most recognizable traits of Tsaesci ancestry.[10]

Two Akaviri "Blood Drinker" swords, known as Dawn/Duskfang and Bloodthirst, emulate the rumored traits of their Tsaesci creators. Although some sources claim Tsaesci fight without shields or armor, using only swords such as the Dai-katana in combat,[11][12] eye-witness accounts from the battle at Pale Pass describe the Tsaesci not only using armor and shields, but also various types of weapons.[13] The nature of the race is a tapestry of historical contradictions, so what little is known about them is uncertain. However, all known encounters with the Tsaesci have not only confirmed that they are humanoids, but that they also use armor and shields in combat. However, it should be noted that the Tsaesci use shields mostly as a form of ceremonial and decorative armor, and don't find widespread use in combat.[14]

The Tsaesci were also known for their use of magic.[9][15] Additionally, they utilize a special magic called 'kiai',[Note 3] which shares similarities with Shouts of the nordic Thu'um.[16]

The Anuad creation myth asserts that the Wandering Ehlnofey were divided onto three continents, with those on Akavir becoming the Tsaesci (and therefore related to the Yokudans and Atmorans).[2] The Tsaesci once invaded Tamriel in 1E 2703, but were driven back by the forces of Emperor Reman I.[17] Surviving Tsaesci in Cyrodiil served as mercenaries and personal guards of nobles.[18] They left many influences on Imperial institutions and culture, including the doctrines and equipment of the Imperial Legion, the creation of the Akaviri Dragonguard (a personal bodyguard organisation for the Emperor) and Fighters Guild, a reverence among the Imperial aristocracy for all things Akaviri, and the adoption of the dragon as a symbol of the Empire.[Note 4] A number of Tsaesci even served the Second Empire as Potentates, among them Sidri-Ashak, Versidue-Shaie, and Savirien-Chorak. The latter two ruled the Second Empire outright during the first half of the Second Era, a period known as the Akaviri Potentate that was brought on by the demise of the Reman Dynasty.[19]

After the fall of the Akaviri Potentate in 2E 430 most Tsaesci fled Cyrodiil, joining other Akaviri that lived in Rimmen and the surrounding area. These Akaviri would later be known as Rim-Men[20] and would help the resurfaced Dir-Kamal armies to conquer Cyrodiil.[21]

Ancestor worship seems to be an integral part of Tsaesci culture,[22][23] although at least four deities, symbolizing different elements, are known: Ilni (weather/air), Myn (sun/fire), Nyfa (earth), and Zisa (oceans/water).[24] Z'en might also be worshipped by the Tsaesci, as origins of his mythology can be traced back to Akavir.[25]

Water occupies a special place in the Tsaesci faith, as they believe that all waterways connect the realms of the dead and the living.[26]

The Proving Festival is an important, yearly holiday of the Tsaesci to appease the ancestors and prove one's worth.[22] It consists of three proofs which a participant has to pass: The first is the Proof of Reverence by which the ancestors are invoked and invited to enter the living world as spirits. The inhabitants of Hakoshae, imperial descendants of Tsaesci, let a paper lotus be carried down a river. The lotus symbolically swims into the realm of the dead to attract the attention of the ancestors.[26] The second proof is the Proof of Strength. It serves to show the ancestors ones strength and that one can resist various dangers.[15] The last proof is the Proof of Wisdom. Traditionally it consisted of scholars drafting grand essays, writers composing ornate poems or philosophers performing lengthy debates. However in Hakoshae the inhabitants use riddles for that purpose.[27]

1.The Last Year of the First Era uses the verb "to slither" when Versidue-Shiae or Savirien-Chorak move. This, alongside the use of the term "inverted gorgons", implies that the Tsaesci have a lamia-like serpentine lower body instead of legs.
2.The meaning of the term "eaten" as given from what is known of the land of Akavir is not clear. Although the description of the "vampiric" Tsaesci might suggest literal meaning, it could be a metaphor for being subdued. In Mysterious Akavir by an anonymous writer, the Tsaesci are told to have "tried to eat all the Dragons. They managed to enslave the Red Dragons, but the black ones had fled to (then) Po Tun". Also, the Akaviri Diary Translation of an Akaviri messenger states that during his journey to deliver orders to Fort Pale Pass he met another Akaviri messenger, stating that his leg had been badly hurt by wolves. As the Tsaesci are described as beings with humanoid upper body and snake lower bodies, to being entirely snake-like, this statement would suggest that men indeed continued to live in Akavir, even if they were enslaved by the Tsaesci. The Akaviri-made Alduin's Wall shows members of the Dragonguard appearing to be human-looking.
3.Children of the Sky only mentions "Akaviri swordsmen". However, this probably refers to the Tsaesci, as they are said to heavily rely on swords in combat.[11]
4. The main used emblem of the Second Empire however remained the Red Diamond.