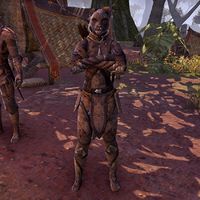 Centurion Burri is a Khajiit officer of the Aldmeri Dominion found at their camp just outside the ruins of Senalana. Burri is unique in that she does not speak in illeism (third person) like most Khajiit.

Around the ruins you'll find a troop of battered and beaten Dominion soldiers. Near the entrance you'll find an exasperated Khajiit.

"Well met. Good to see you. Razum-dar said someone looking like you might turn up. I'm glad you did."
What's the situation?
"The Colovians detached this force from their cohorts in Arenthia. Moved on this ruin, a place the Ancients called Senalana. Luckily, we had scouts spread throughout the Northern Wood and were able to respond right away."
Why are they here?
"We are still not sure. I sent out three of our best men, but they haven't reported back. If you're looking to make a difference, seek them out. Panamar, Annthiel [sic], and my cousin Juluda. They should be able to tell you more."
I'll find them.
"Bright moons guide your path. Keep your eyes open for Raz, too. No doubt he's found some valuable information, as well."
Why is Razum-dar out here?

"I don't know. But if the rumors about him are true, it must be important. The Queen wouldn't send one of her top agents into the field if it didn't threaten the whole of the Alliance."
You speak Tamrielic like an Imperial, Centurion.
"Hah! Yes, Burri's mother would be very disappointed. Look, I've been a soldier for too long to care about how I talk. You want the proper cadence, go talk to a moon priest."

How goes the battle itself?

"It's war. How can we ever call any battle good or bad? Here, today, we'll lose troops to hold this old ruin. Why? Because my commanding officer told me to see it done. As if the Ancients care about what we do here today."
You don't agree with being here?

"I never said that. I'm a Centurion in the Queen's own. Happy and proud to be an Eagle. I'm just saying that the men and women under my command are dying today to hold a ruin. Not for the glory of the Dominion, for a ruin."

"Yes, the Ancients. The Ayleids. Their ruins dot Valenwood, all the way back to the coast. Whatever this place is, it must have been something special. Not many ruins left standing out into Elsweyr proper."

What was that you said about Arenthia?

"City to the East. Used to be Colovian, they pulled out years ago. My people and the Wood Elves moved in, made it their own. Whoever this general is … Lavinia, I think? She was keen to reclaim Colovian ground right away."
Have they attacked anywhere else?

"I got word from the scouts they were also making for Fort Grimwatch, to the west. Had to let them pass. And I think one of their cohorts went south towards Vinedusk. Moons luck to them down there. Those Bosmer are crazy."

"They were careful. That many troops, sneak attack on an entire city? Their General's a tactician, mark my words. The Arenthia Guard fought bravely, from what I hear. Right now we have orders to contain them. Hopefully we'll retake the city soon."

Return to the camp and speak to Burri. If you destroyed the crown and let Raz die, she'll ask:

"You've returned. What happened? Where is the Queen's agent?"
He's dead. He sacrificed himself so that the artifact could be destroyed.
"Unbelievable! Razum-dar, dead. I hope … Burri hopes that wherever he is, the moons shine bright upon him. If he trusted you with this task, he must have greatly respected you. Go well, soldier."
"Amazing to think he gave his life to destroy that thing. Don't worry about us here. With the vault out of the picture, the Colovians will pull back before long. Good work, soldier."

If you did not destroy the crown and Raz lives, she'll say instead:

This Elder Scrolls Online-related article is a stub. You can help by expanding it.
Retrieved from "https://en.uesp.net/w/index.php?title=Online:Centurion_Burri&oldid=2199825"
Last edited on 22 August 2020, at 17:45