An ancient Khajiiti shrine called the "Temple of Seven Riddles" has been overrun by the Khajiit's eternal enemy, the dro-m'Athra. With each passing hour, more Lost Cats pour into Nirn through a gaping rift between worlds. If Tamriel is to be saved, this Maw of Lorkhaj must be closed. 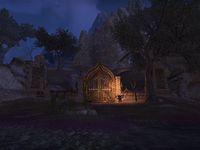 The Maw of Lorkhaj is a desecrated temple in Reaper's March. It has both a Normal and Veteran mode.

Normal and Veteran Maw of LorkhajEdit

There are several Achievements associated with this dungeon: