The world of Arena contains many places that can be visited. In total, there are 387 cities and dungeons, plus the Wilderness.

Upon leaving the Imperial Dungeon, the player's character will be transported to a random settlement in the home province of their race.

There are eight city-states in each of the provinces excluding the Imperial Province, which only includes the Imperial City. They are as follows:

Each province except the Imperial Province also has eight towns, which are mid-sized settlements.

There are sixteen villages dotting each province except the Imperial Province.

The door to a dungeon in the wilderness.

In addition to the fixed Main Quest dungeons mentioned above, each province except the Imperial Province contains fourteen additional dungeons which can be unlocked by being sent to them via certain random side quests. These dungeons are fixed in numbers and locations, but not in names, which is determined at the time of the quest which first unlocks them. Once you've unlocked all fourteen dungeons in a province, subsequent side quests will begin to send you back into dungeons you've already unlocked, which keep their original names.

More large dungeons can also be found in the wilderness. Their entrances appear either as small hills with a door in them or as small crypt-like buildings surrounded by four large towers.

A message for arriving at Amol.

When you arrive at a village, town or city, one out of various welcome messages will appear. Those applying to villages and towns are always one out of three generic messages, while those of cities are unique and can be found on their respective pages, while the generic ones and the basic structure of these messages are as follows:

Regardless of the village, town or city, all fast travel messages in Arena start with the next information, followed by a message of welcome from the settlement.

You may ask townsfolk for directions to important buildings. In a settlement, the entrance to every building is marked as a red square on the map, apart from the palace. In the wilderness, only dungeon entrances are marked in red. Right-clicking on the door of a service building will tell you its name, and if it's in a settlement, then its name will be added to your map. Some doors in the wilderness cannot be entered, but you can enter any building in settlements, though a few have entrances blocked due to random generation.

The wilderness contains locations that you can find when venturing outside of villages, towns, and city-states.

The wilderness areas are randomly generated rather than being hand-designed. This doesn't mean the areas change, but rather describes how they are created. Smaller building blocks (or tiles) were handcrafted and then an algorithm uses computer-generated "seeded" randomness to determine how all the wilderness blocks will fit together. Computer programs often use what is called pseudo-random numbers. This can be described as a string of seemingly random numbers that the computer can select from, but the list is always in the same order. In order to prevent recognizing the pattern of numbers, a programmer will first provide the random number generator with a "seed" or starting point within the string to start drawing numbers from. As an illustration, the value of PI can be considered as a string of seemingly random numbers, however, they are always in the same sequence of 3.1415926535… If the decimal places are used to simulate the randomness of a d10 (ten-sided die), the first roll will be a 1. The second roll will be a 4 and so on. This will appear random until the program is restarted and the first roll is again 1 and the second roll is 4, etc. If a seed with a value of 5 is first used, then the first roll will be given the value of the 5th decimal in PI instead of the first. The first roll will be 9 and the second, 2. For dice rolling, the algorithm could use the current time as the seed. This would allow the program to use a different starting point each time the program is started and would make it difficult to recognize any pattern. Arena uses a single unique seed for each area based on the name of the current village, town, or city-state. This allows each area to be unique, but remain consistent each time you visit. Procedural generation allows for many large areas to be created while requiring only a minimal amount of storage.

Due to the wilderness "seed" being based on only the first four characters of a settlement's name, if those are identical to another settlement, they will have the same wilderness map. In Black Marsh, this applies to the following locations: Rockgrove, Rockpark, Rockguard, Rockpoint, and Rockspring. 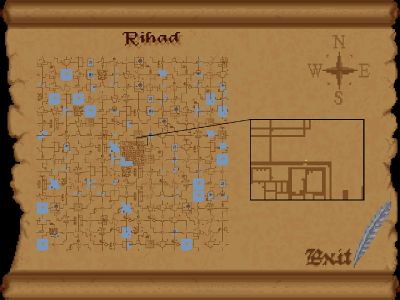 One 16th of the wilderness map for Rihad. (256 out of 4096 tiles) The inset shows what the in-game map would display just after exiting the city. The city map has been added as an overlay to the wilderness map.

There are 66 unique blocks that are used to fill in the wilderness areas. The red doors in the map-view consist of a single cell, and each wilderness block is a square of 64x64 cells. The algorithm creates each wilderness area as a square of 64x64 wilderness blocks. The center 4 blocks contain the current settlement, and although villages, towns, and city-states are various sizes, they each sit on a plot of land that is 128x128 cells. Depending on your game setup and character, it takes approximately 20 minutes in real time to walk from the city gate to the edge of the wilderness at an average speed. There is nothing obvious to indicate you are at the edge of the wilderness area, and the game doesn’t prevent you from continuing farther. This can lead to the perception that the wilderness is endless. Unfortunately, this can potentially lead to problems with your current game. The terrain will begin repeating the four current wilderness blocks endlessly, and the glitch lands will be entered if you save and reload your game, or enter and exit a building. If it is nighttime, or if there is inclement weather outside, this will cause the game to crash, and can potentially make a save unusable.

The wilderness blocks are numbered 5 through 70, and blocks 41, 50, and 56 are not used. The blocks are organized into several lists that are used when the wilderness area is created. Blocks 28, 29, 32, 34, and 49 occur in more than one list, so it is possible that these blocks will be encountered more often than others during exploration. 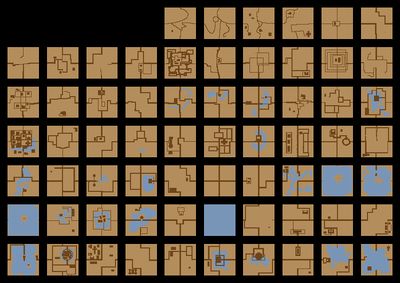 Wilderness Blocks starting with block #5 and counting right then down to block #70.

While in the wilderness, the map will open to show your current location and can be scrolled north, south, east, and west to reveal a square of the 4 closest wilderness blocks. As you cross the center of a wilderness block and are within approximately 32 cells of the next area, the two new closest blocks are added to the map while the farthest two are removed. Pressing <F2> will give a set of coordinates for your position, such as 43, 77. These values range from 32 to 96 when facing north or east and 31 to 95 when facing south or west. The coordinates roll over from 96 back to 32 (or 95 to 31) as you cross the center line of a wilderness block.