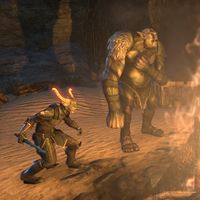 A goblin and ogre living alongside one another

Goblin-ken (or goblin-kin)[1] is an unspecific term used to refer to several different beastfolk, including goblins, ogres, and gremlins. Although they are elves, Orcs are widely considered to be goblin-ken due to the common belief that they are somehow related to goblins.[2] Goblin-ken are used as slaves by the Altmer of Summerset Isle. During the Camoran Dynasty, hundreds of goblin-ken were set free by the rulers of Summerset Isle and allowed to settle the lands north of Valenwood. The Orcish tribes chose to settle high in the Wrothgarian Mountains, near Old H'roldan, which was a part of High Rock at the time. This was due to their dependence on a rare shaggy giant centipede herdbeast that can live only at high altitudes on alpine and sub-alpine forage. The village eventually grew into Orsinium (literally translated as Orc-Town) at the location.[2] After the first sacking of the fortress by the Order of the Diagna and the subsequent rebuilding by Gortwog gro-Nagorm, Orsinium had apparently become solely inhabited by the Orcs, with no further reference to their fellow goblin-ken.

Malacath is the patron of Orcs and Ogres; he considers the latter to be his "little brothers" and is known to protect and guide them.[3] The Orcs worship him as both the Daedra Malacath and the god Mauloch. The goblins worship a god named Muluk, who is thought to be related,[4] as well as the Blue God, an aspect of Malacath.[5]

Orcs, or Orsimer, are an elven race, although they were historically viewed as little more than beasts by the other mortal races. They are the most intelligent of the goblin-ken, and openly trade with and even serve outsiders. Many Orcs are very loyal to Malacath and live a life dedicated to him.

Goblins are violent, primitive humanoids, often found inhabiting sewers, caves, and ancient ruins. They live in a clan-based society and individuals can vary widely in size, intelligence, and combat capabilities.

Rieklings are a race of small, blue-skinned Goblins once present on mainland Skyrim in the Second Era, but are most notably found on northern Solstheim.

Riekrs are a race of magically gifted white-skinned Goblins that can be found in Wrothgar.

Ogres are giant, brutish humanoids with low intellect. They are capable of practicing magic.