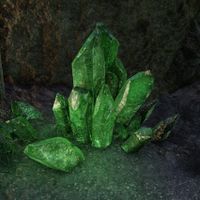 Malachite, commonly known as glass (and not to be confused with common glass), is a rare, volcanic, milky translucent green crystal. It is used in creating strong, yet lightweight metallic Altmer armor and weapons.[1] It is similar to ebony, but is less durable and more lightweight.[2] It bears no relation to the common, brittle glass used in windows and ornaments, as it is far stronger and has a much higher melting point.[3] It is most commonly found in Morrowind on the volcanic island of Vvardenfell, but ore veins can also be found all across Tamriel.

Glass ore (or malachite ore) is richest on the island of Vvardenfell but can be found all over Tamriel. The matrix is a very hard stone, and separating raw glass from the matrix is hard work. Nevertheless, raw glass mining is considered a honest job that pays well.[4] The Dwemer mined raw glass[5] and were known to make use of vitrine, a type of Dwemeri Glass used for constructing certain vamidiums.[6]

The knowledge of working with glass started in Summerset, and was once a closely guarded secret on the isle, but a Dunmer slave who worked under the isle's master smith escaped and as an act of revenge, revealed the secrets of its creation to the rest of Nirn. Thanks to his contribution, it is now known that glass armor is made using rare metals such as moonstone in order to give it the right strength,[3] and is studded with malachite to create an armor stronger than steel due to its ability to absorb and distribute shock.[7] Glass armor is considered the pinnacle of masterful Dunmeri light armor design.[8] Similarly, Elven-made glass weapons feature extravagant use of rare metals and cutting edges made from crystalline volcanic glass to produce blades of virtually unparalleled sharpness and light weight.[8] Glass weapons wear down quickly, however, and require frequent repair.[9]

Raw glass has also been used in alchemy.[10] Malachite ore must be smelted down into ingots of refined malachite before it can be used in smithing, and even then only skilled glass smiths can work with the material. Hammer blows struck across the grain run the risk of shattering the armor.[3] Malachite mining is very profitable. In Morrowind, the East Empire Company had sole authority to trade in raw glass during the Third Era. No such limits existed in Skyrim by the Fourth Era, and settlements such as Kynesgrove depend on the mining of malachite ore.[11][12] Malachite is sometimes stylistically integrated into arms and armor of a different base material to give the items the appearance of glass equipment, although such practice is merely cosmetic.[citation needed]

High Elves often stylize their glass equipment with avian imagery.[13] Vivec's Buoyant Armigers use spiky glass equipment, an appearance inspired by the lessons in Vivec's sermons.[14][15] There is a variant of glass called sunglass, but smithing is a privately taught craft in Sunhold.[16] The Redguards of Hammerfell are known to loot and plunder ancient elven ruins for their deposits of malachite ore.[17]

As of 2E 582 malachite was commonly used by Bretons of eastern regions of High Rock to produce needles.[18] At the same time period malachite was also utilized in other crafts. Items such as malachite vases shaped after Breton watchtowers and malachite hairpins with the imagery typical for Reachfolk were seen throughout Tamriel.[19][20]