"Feel the solidity of the ground under your feet, and taste the wind. By his will is our world manifest, and the rocks, and the trees, and the birds in the sky. Y'ffre is with you at every turn, in every moment." — Bones of the Forest

Jephre, as depicted by the Altmer

Y'ffre (or Jephre or Y'ffer),[1] the Singer, the Storyteller, the God of Song and Forest, the Spirit of the Now, and the Green Man [2] is the most important deity of the Bosmeri pantheon, also worshipped by the Altmer, Bretons, and Snow Elves.[3][4] He (occasionally she)[5] was one of the strongest of the recognizable spirits that crystallized shortly after the beginning of time, and played an important role in the coalescing of the physical world during the Dawn Era.[6]

He is said to have been the first to transform himself into the Ehlnofey, or Earth Bones, giving rise to the rules and principles of nature and life on Nirn.[7][8] He thus formed the frame upon which nature is woven, loomed through with his own song-echoes and sight-perception for mortals to interpret through study of the Sea's mystery, but seeing and hearing nothing himself. Day, night, and the places between are the manifestation of his interpretation of the time-law Anui-El is said to have established within Nirn.[9]

Y'ffre is known to send wisps to herald the storms of Rain's Hand. To see one is to see the promise of new growth, new life, and a new chapter in nature's cycle.[10]

"Heavy-bearded Y'ffre, speak through me. Tell us of the time before time. Let the story grow in me. Let my heart echo to the pounding of your feet along the story-lines, the bones of the world. I will walk Your steps, and know Your story."
—The Green Singing

Y'ffre is strongly associated with songs and stories, as a mythical expression of his role in shaping the story of nature. His acts of creation are described as "tales",[5] and he is said to have given the first name to every living creature, solidifying their place in the world.[11] Y'ffre sang to Aetherius, weaving songs so beautiful that stars were compelled to dance and sway, continuing to wink and blink afterward in memory of that song.[9] Y'ffre's priests, called Spinners, also experience life as one long story, as they not only keep the histories and laws of their people, but also narrate events that have yet to occur.[12] As Y'ffre instructed the world and the first Bosmer through tales, so too do the Spinners elucidate and educate their kin through elaborate, sometimes befuddling, metaphors, that nonetheless always contain an essential truth.[13] Spinners can use their "narrative magic" to profoundly alter the stories of others, even altering their memories of past events.[14] 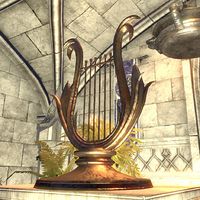 Indriks are magical creatures that bear some relation to Jephre.[15] They seem to draw strength from the bones of the earth beneath their hooves.[16] They can be found within the forests of Summerset Isle, though they are very elusive.The equipment of Jephrine Paladins is modeled after Indriks. All that is known of Jephrine Paladins is that they are protectors of the wilds.[17] Unlike the Bosmer, Altmer demand obedience and perfection from the nature, shaping it to fit their needs to improve it to make it more artistically perfect forcefully - be it through magical or mundane means, despite their appreciation for nature.[18][19]

Priests of the Green

The Bosmer believe that out of the primordial Ooze, he first brought forth the Green, consisting of all plant life in the forests of Valenwood, from mosses to the mighty graht-oaks, teaching the birds to sing and the waves to lap against the beach and gaining sight-perception of all that occurs within the sight of birds and the reflection of waters.[5][9] Next to materialize were Y'ffre's people, the Bosmer. He instituted the Green Pact between the Bosmer and the Green, which forbade any harm to the plant life of Valenwood. In exchange, the elves could request the forest shape itself to their needs, providing food and shelter, and also were able to tap into certain atavistic forces of nature, reflecting their chaotic origins.[20] Bosmeri legend holds that any who break the terms of the Pact will be consigned back into the Ooze, their song in the world replaced with silence.[5] In modern times, the Pact is enforced by regional "treethanes", who are responsible for a certain jurisdiction and dedicated to the preservation of the natural resources therein.[21] Ring of the Wild Hunt is Bosmeri artifact associated with Y'fffre.[22][23]

To the Bretons, Jephre (also known as Jeh Free)[24] is the God of the Forest and the spirit of the "now". He is typically considered an elven god, and is understood to have turned himself into the Earth Bones and establishing the laws of nature.[8] He is still revered by some Breton hunters and farmers.[25] Bretons respect the Vicars of Jephre, a group of his adherents who are known defenders of the natural world.[26] The Beldama Wyrd are a witch coven attuned to nature, and are also known to venerate the ancient forest and commune with Jephre the Storyteller.[27] They are guided by elemental spirits known as the Guardians,[28] which are among the extinct Ehlnofey who claim they were once Y'ffre.[29] When the First Empire, took control of High Rock they forced the Bretons to convert to the worship of the Eight Divines, however, the worship of lesser deities still persisted and Jephre continued to be worshiped.[25]

To the Druids, they refer to the same entity as Y'ffre, the Green-King,and the Slumbering Father of Nirn.[30] Bretondom originated from Nedes and Aldmer interbreeding.[31] Their Nedic[32] ancestors were known as the Druids of Galen,[33] who adhered to the True Way in which one is to lead a life connecting with and valuing the natural world.[34] Naturally, Y'ffre took the forefront of their faith. These Nedes survived in ancient High Rock by tapping into, nurturing, and terraforming nature.[30] When the Druids of Galen experienced the "three mornings of sail" sometime after settling on the Systres, three sects developed, each with their own interpretation of Y'ffre's will; the Stonelore, Eldertide, and Firesong Circles.[35][36]

Y'ffer is the Khajiiti name for Y'ffre, and he is often linked with Nirni. In older traditions, Nirni chose Y'ffer over Hircine as her mate after Y'ffer created the first flower for her and fathered many of her children.[1] Heartbroken, Hircine slew the Graht-Elk, champion of Y'ffer, and took to wearing its head as a trophy. Eventually Y'ffer became corrupted by Namiira, who then struck and killed Nirni. Hircine, along with Azurah and Khenarthi, slew Y'ffer and made a cairn out of his bones for their beloved sister.[1] In more recent stories, such as those attributed to Clan Mother Ahnissi, this aspect of their relationship is downplayed. Y'ffer is portrayed as snooping spirit that cannot keep secrets, eavesdropping on Azurah's creation of the Khajiit and promptly telling Nirni what he overheard. In gratitude, she allowed Y'ffer to alter some of her children in the same manner, which became the first Bosmer.[37] These same stories also hold Y'ffer responsible for "Fadomai's Children" (i.e. Daedric Princes) being able to cross the Lattice and enter Nirn.[37] Despite his appearance in Khajiiti myth, he is not considered a figure of worship. Prior the Riddle'thar Epiphany, he was recognized as a bastard son of Ahnurr, though his temperament was the opposite of his father's.[1]

An Argonian heresy relating to Y'ffre emerged among the refugees who fled to Valenwood from Black Marsh after the creation of the Ebonheart Pact. Having severed their ties to the Hist, many of these Argonians turned to Y'ffre and the trees of Valenwood in the hope that he could allow them to reproduce. This heresy was potentially ended in 2E 582 when ex-Shadowscale refugees assassinated those responsible for abandoning the Hist.[38]

Although Ayleids followed the Daedra, the Aedra of Elven pantheon were still widely revered, with probably a majority of the Ayleids continuing to pay them homage, but cults devoted to the various Daedric Princes sprang up across Cyrodiil, tolerated and then celebrated.[39]