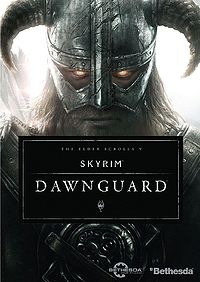 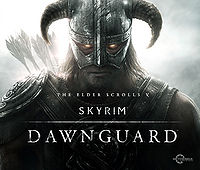 The image that was the centerpiece of the announcement of Dawnguard

Dawnguard is the first major official add-on for Skyrim. The add-on revolves around the Dawnguard, an ancient organization dedicated to hunting vampires and thwarting the schemes of Lord Harkon, who intends to use an Elder Scroll to permanently blot out the sun. You can choose to aid the Dawnguard in their quest to destroy the vampires, or join the vampire clan and gain the powers of a Vampire Lord.

Two new factions are added with this add-on:

The Dawnguard — A group of vampire hunters dedicated to destroying the Volkihar vampire clan.

Volkihar Vampire Clan — The Volkihar vampire clan, led by Lord Harkon, intends to blot out the sun and dominate Skyrim.