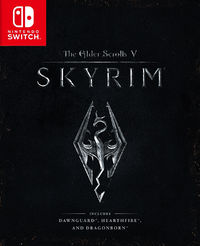 The purpose of this page is to document some aspects of Skyrim that are specific to the Nintendo Switch version of the game. The vast majority of gameplay is identical on all platforms (PC, Xbox, PlayStation, or Switch): the quests are the same, and the glitches are the same with the exception of lag issues being less prevalent on PC.

The Nintendo Switch version of Skyrim was released on November 17, 2017, with all add-ons included. It is based on the Special Edition and contains gameplay features and patches incorporated into that release. The Switch edition also features motion controls and compatibility with Nintendo's amiibo figures.

Some of the PC features that are not available on the Nintendo Switch are: 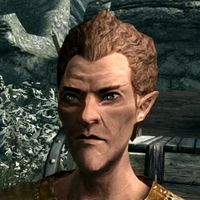 The chest at the Throat of the World

Although the PC keyboard and Nintendo Switch controller clearly provide very different methods of interacting with the game, most of the controls work the same way. Some differences, however, include:

As in other Special Edition releases, all three official add-ons are already included, and cannot be disabled individually.