Hi, I'm Enodoc and I live in Britain. Some of you may know me from The Fable Wiki. 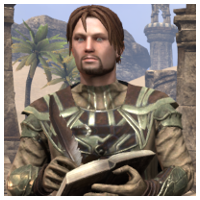 Projects and Other LinksEdit

Places - do we need to re-evaluate all of these again?

Regarding keeping Building types separate from POI types, in the case of lighthouses (mentioned above), I was thinking we could perhaps change the Style type from Lighthouse to Beacon (which may better represent Greenheart, Riverwatch and Crown Point), and then have Lighthouse as a Building type. In the exact case of a POI being a Building, we could move such buildings into the Landmark style. --Enodoc (talk) 11:26, 29 January 2016 (UTC)

Should we include building types as possible style types, or not?? ie, if the POI is exactly a building, is a building type more useful? eg, Anvil Lighthouse
Yes.

Unfinished CP tasks that were archivedEdit

With a bit of faffing, I managed to get {{showhide}} to do pretty much what I wanted:

I also have a version where {{showhide}} is not used, and the collapsible formatting is applied directly (this puts the "[show]" box in an easier-to-see place):

In either case, it would probably be worth creating a wrapper template if we want to go down this show/hide route for ease of use. --Enodoc (talk) 21:10, 26 December 2015 (UTC)

These may be adjusted for larger or smaller dungeons, but it's generally this or add/subtract 1 on all levels as appropriate.

Just thought I'd throw together a couple of lore inconsistencies I noticed with ESO (if anyone wants to comment, feel free to leave a message).

Why are there so many Ayleid ruins in High Rock when it was supposed to be the Direnni stronghold? Where are the Direnni ruins? Why did the Direnni allow the Ayleids to build Erokii?

The Xylo River is a waterway along the traditional border between Valenwood and Elsweyr. No comment.

Quests are coloured based on their recommended level relative to yours. *Changes with Craglorn

Do these colours mean anything in terms of gameplay? Perhaps a lesser/greater reward upon completion?

Objectives that logically should be part of the story (because the story directs you right past it, or it is otherwise very story-relevant), but technically are not because the pointer quests don't end there.

Here is a map of the known regions in ESO, and some areas that could potentially become new zones and adventure zones. This is based on an earlier version of the official Tamriel map, which had region borders. 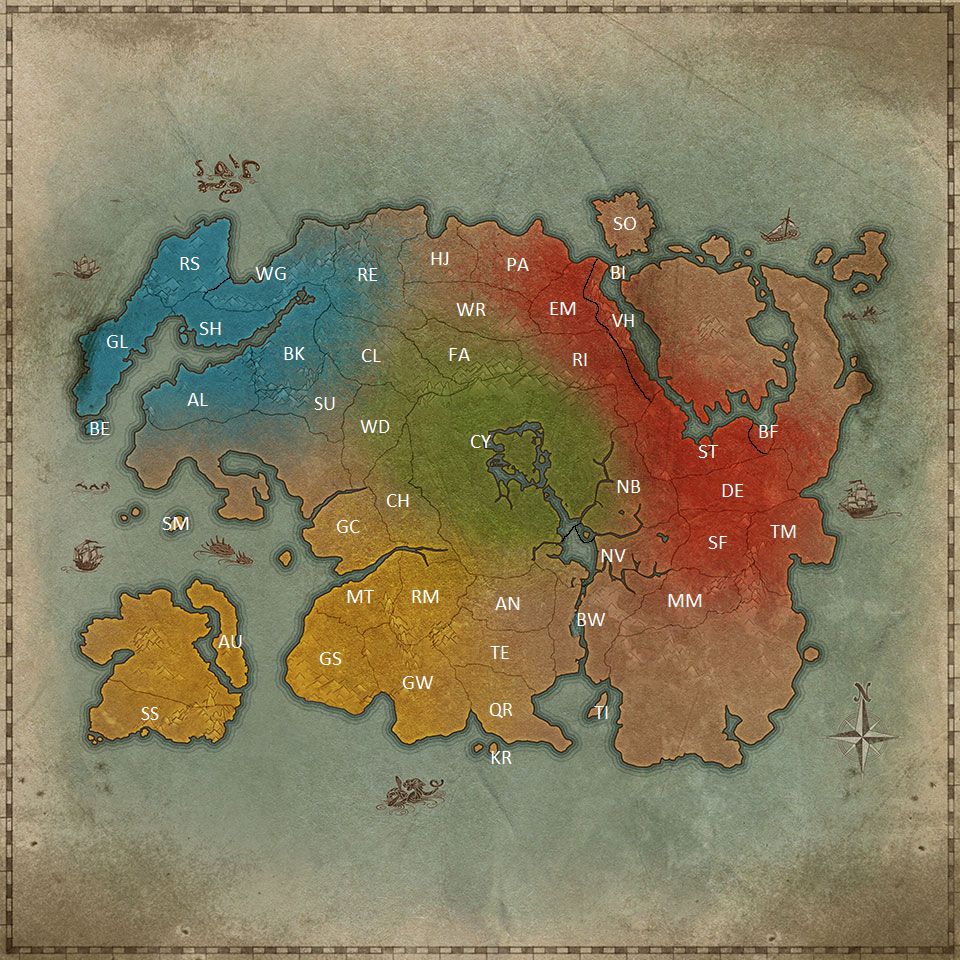 Extra boundary lines have been added where they were missing. (eg, between RS and WG, and down the side of EM and RI)

Best-guess of Vvardenfell geographical regions, based on weather and climate conditions in-game. 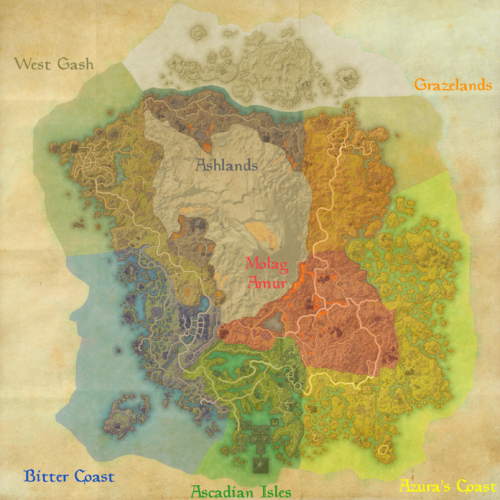 Not that this is an endorsement to actually do it, but since we do it anyway for our information, I thought I'd add here some things I found while digging in the data files that aren't used yet, but may reasonably appear in the future. Only things that look "finished" are here, no partially-created stuff.

In connection with Molemir's Estate in Grahtwood:

Update: Keeping solely for posterity. Thieves Guild on PTS makes no mention of the Violet Lodge; seems that it was scrapped, much like the original Imperial City design. A casualty of B2P?

Dyus of Mytheria
So he's the chamberlain of Jyggalag. But what/where is Mytheria? My opinion - Mytheria is the name of Jyggalag's realm of Oblivion (or at least it was, before it became the Shivering Isles).

Time
Does time pass linearly and concurrently in Oblivion, since Akatosh exists within Mundus? I would like to say that it is linear but not concurrent, as I would expect the Daedra to somehow regulate their own 'time'. Then the only instances when time is concurrent are when Oblivion and Mundus are connected [by Oblivion Gates, the Mouth, Dark Anchors] (otherwise logic doesn't work). Without concurrent time, a day in Tamriel could correspond to a century in the Shivering Isles, or a minute. Or indeed both or either, depending on the whim of Sheogorath.

The Tower
Is there a more mystical connection between The Tower and The Tower? It is said that the Tower is embodied by the fourth constellation; is that just representative, or is there more there?
How/Why are the constellations numbered? So far, I have

The Wheel
If Mundus is the hub, Aetherius is the spokes, and Oblivion is the spaces, what is the rim? Vehk doesn't answer that question, he just goes into crazy stuff about giving birth to souls. Or is it that the rim is Aetherius, and the spokes are the Divines, acting as the bridge between Mundus and Aetherius?
How can there be eight spokes, but sixteen spaces?

ESO's PGE-Equivalent
The Improved Emperor's Guide to Tamriel (TIL)

The Imperial Reserve [Cyrodiil] is printed on the map in the same font style as the counties
Moridunon [Summerset] is mentioned in the descriptions of Artaeum; it may be a region name (or something else entirely)