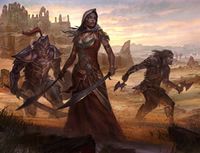 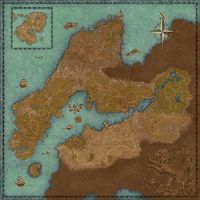 A map of the Daggerfall Covenant's home territory

The Daggerfall Covenant is one of the three joinable factions participating in the Alliance War, the other two being the Aldmeri Dominion and the Ebonheart Pact. The crest of the Daggerfall Covenant is a lion, and its colors are blue and silver. It consists of the kingdoms of High Rock, the Kingdom of Orsinium, and the Kingdom of Sentinel. The alliance is an egalitarian association which uses its military might to secure lucrative trade routes. Led by High King Emeric of Wayrest, the Covenant seeks to capture the Ruby Throne in order to restore the Second Empire and return stability to Tamriel. Covenant players will begin on Stros M'Kai after being washed up unconscious on the shores of the island following their escape from Molag Bal's realm of Coldharbour.

The marriage of King Emeric to Princess Maraya of Sentinel led to the Kingdom of Sentinel, under King Fahara'jad, entering a trade agreement with High Rock. The Orcs of Orsinium, led by King Kurog, joined the alliance after Emeric pledged to restore their kingdom following their assistance in Ranser's War; however, there are a number of Orcish tribes both in and outside of the Wrothgar Mountains who remain independent of the Covenant.

The Daggerfall Covenant's home territory covers the traditional provinces of High Rock and northern Hammerfell, as well as the kingdom of Orsinium.

The Covenant also have a territorial claim over the northern and northwestern parts of the Imperial heartlands.

is considered an independent kingdom under the terms of the Covenant, and has been declared a "truce zone" by King Kurog. High Isle

is part of the alliance, but does not involve directly aiding the Covenant. As such, they are not marked as Covenant territories on the wiki.

"One land! One Emperor! Who among you will stand with me?" —High King Emeric