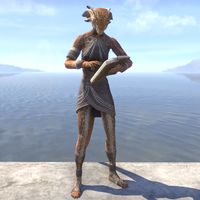 A player perusing the Skills menu

In Elder Scrolls Online, you advance your character by using different abilities, granted to you through different skill lines. In order to increase your progression in a skill line, you must use those skills. There are three types of skills: Passive Skills, Active Skills, and Ultimate Skills.

Passive Skills provide a bonus all the time. Some require certain items to be equipped or Active Skills to be slotted, but otherwise you don't need to think about them. They generally have a number of upgrades available, which can be acquired by increasing your level in the relevant skill line. In most cases, this is achieved by using the Active Skills within the same skill line. In other cases, such as crafting skills, this can be achieved via crafting items or research. Each upgrade costs an additional skill point. Some Passive Skills do not require an investment of skill points, but are instead provided free as a result of certain situations. For example, each race gets one free passive which increases their experience gain with a given skill. The first level of each of the Crafting quality skills is free. There are free Passive Skills associated with becoming a Werewolf or Vampire, as well as some provided by the keeps and resources owned by your Alliance if you take part in the Alliance War. All current Emperors also receive some free Passive Skills.

Active Skills are the ones you'll be using most in the game. You can have up to five slotted in your Action Bar, by default bound to the 1-5 keys. At character level 15, when you acquire Weapon Swapping, you gain an additional 5 slots for your alternate weapon. Like Passive Skills, they become available once a certain level in the skill line is reached. However, they cannot be upgraded, but rather improve through use. They have 4 Ranks, after which they may be Morphed into a new version. You will have two Morph options, which add different effects to the skill. Morphing a skill costs an additional skill point. Once a skill is Morphed, it can increase in Rank 4 more times, but may not be Morphed again (so you can't get both Morph bonuses for any skill). Using your Active Skills will increase your overall level in the skill line, making new skills become available as you progress.

Ultimate Skills are similar to Active Skills, but instead of using Stamina or Magicka as most Active Skills do, these use a third resource called Ultimate. Ultimate builds over time as you fight, and (with one exception) completely depletes when you perform an Ultimate Skill. No skill line has more than one Ultimate Skill, if it has one at all. Like Active Skills, they become available after a certain level in the skill line, raise in Ranks, and can be Morphed into new skills after Rank IV. You may only have one Ultimate Skill slotted at a time (two if you have Weapon Swapping after reaching level 15). By default it is bound to the 'R' key.

Each of the game's classes has three skill lines associated with it, which are immediately available to your character and are specific to your class. To advance in the skill line, at least one active skill from the skill line must be slotted (as one of the regular five skills, or as the active Ultimate) on whichever of your two skill bars is in use at the moment of gaining experience points.

There are six weapon skill lines, each linked to a specific type of weapon. These lines are:

Any class can advance in any of the Weapon skill lines, while using the appropriate weapon at the moment of gaining experience (whether that experience is gained by killing a monster, completing a quest or by any other means.) Advancement will be faster by slotting one of the active weapon skills on your current skill bar (skills 1-5, or the Ultimate) when gaining experience points, with more slotted skills granting faster advancement. If you have weapon skills from the "wrong" weapon slotted on the skill bar, the individual skills will gain progress (from I to IV), but the overall weapon skill will not (from 1 to 50).

There are three armor skill lines:

Any class can advance in any of the Armor skill lines, while wearing the appropriate armor type. Only 1 piece need be worn, but progress will be faster the more pieces you wear of that type.

Each race has its own skill line. Your overall character level determines the abilities you may choose from your racial skills. See:

Progress in the Racial skill lines is directly equivalent to your character's overall experience level.

The Guild skill lines include lines for NPC guilds:

Progress in the Guild quest lines (usually from 1 to 10 - the Thieves and Dark Brotherhood go up to 12) is done by doing guild faction quests, both in the faction's quest storylines and other repeatable quests (usually daily) that are related to the faction. In most cases (except for the Psijic Order which consists only of the quest storyline), you will HAVE to do some of the repeatable stuff to level your faction reputation up high enough to continue the storyline, or to level it up to maximum after the storyline is completed, because the storyline itself does not give you enough progress to reach the next stage of the quest storyline.

Progress in the Assault and Support lines comes as you gain Alliance War points for any PVP or alliance-war related activities - killing other players (in Cyrodiil, Imperial City or Battlegrounds), completing daily quests in Cyrodiil (both the war quests, and the PVE quests in Cyrodiil's various towns), capturing or successfully defending keeps and resources, capturing Elder Scrolls, and competing in Battlegrounds. Even getting Alliance Points from daily rewards from your ESO+ subscription counts towards Assault/Support progress on whichever of your characters is used to claim the reward. You only need to reach about halfway from level 13 to 14 in Alliance War rank, to max out the Assault and Support lines at 10 each (they both increase together at the same rate).

In addition to the above, participating in the Alliance War has a chance to provide you with the use of certain unique Artifacts that grant you special powers:

Crafting skill lines are each related to a profession and help boost the products you create in the related profession. These include:

In all seven cases, you learn by doing it, and by completing the daily crafting writs once you have been certified as a craftsman of that skill. In the case of Blacksmithing, Clothing, Enchanting, Jewelry Crafting and Woodworking, you learn even faster by deconstructing found items (although you gain almost no progress from deconstructing an item you made yourself - however, you get full progress from deconstructing items made by another character, even if that other character is one of your own on the same account). The higher the quality of item you deconstruct, the more "inspiration" is gained towards that craft, especially if the item in question has the "Intricate" trait. Alchemy and Provisioning have no Deconstruction, and Enchanting has no equivalent to the Intricate trait on worn/wielded equipment.

These skills are temporarily available as part of certain group dungeon mechanics:

There are several methods of earning skill points, listed below, up to a current total of 481 points including all Chapters and other DLCs:

Spent skill points can be refunded at a Rededication Shrine for a fee of 50 Gold per point, or with a Skill Respecification Scroll

Three of the skill points listed above are unobtainable depending on your owned content and choices you make in the game.