This article is about the account-wide item interface. For the consumable trophies previously called "Collectibles", see Trophies. 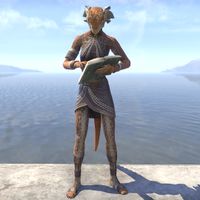 A player browsing the Collections menus

The collections system in Elder Scrolls Online is an interface which stores account-wide collectible items and service upgrades. Once acquired, collectibles are available for use on all characters without needing to be obtained again. Since they are separated from the Inventory, collection items do not take up bag space. Some categories show up only after at least one item in it is collected. While your Collections menu is open, your character will look like they're reading a book with a green cover to any players who pass by.

Collectibles currently managed by the Collections interface include:

Information about owned DLC is also available through the Collections interface under the Stories tab (which is divided into Zone DLC, Dungeon DLC and Chapters). This provides details on which DLC/Chapter an account has access to, and whether the starter quest for that DLC or Chapter has been accepted. It also provides a direct link to accept the quest.

The Housing tab lists all of the player homes available. The tab is separated into sections for houses you've Collected and houses that are Not Collected.

By selecting a house you own in the Collected homes section, you can see an image of the house, read the home's loading screen text, where it's located, and see what kind of house it is. There is a button on the bottom left labeled Travel to House available in each Collected home's page. This button, of course, allows you to Travel to the home whenever you so choose. Your homes also have nicknames. In this window, you can change your home's nickname using the Rename button in the bottom right.

You can read all of this information about houses you don't own in the Not Collected tab as well. However, you cannot rename a house you don't own, and the option to travel to the home is replaced with a button to Preview the house. Previewing a home is fundamentally different from traveling to a home; if you exit a home while previewing it, you will end up back where you were before you teleported to the house. Conversely, if you travel to a home you own and exit through the front door, you'll end up in front of your house in whichever zone the home is located in. If you own Humblemud, and you exit Humblemud's front door, you'll find yourself in Dhalmora. If you decide to preview Grymharth's Woe while you're standing in Alinor, and you exit the house without purchasing it, you'll find yourself back in Alinor instead of Windhelm.

You cannot travel to or preview a home from the Collections menu while you're in a PvP location.

This tab lists all of the styles you have collected via the Outfit System. Every style available in ESO can be previewed in this menu (except for Crown Store-exclusive styles, which, like pets and mounts, do not appear in an "uncollected state". They only appear in your Collections if you purchase them). Style pieces you haven't unlocked are greyed out; the icons appear in color when you collect them.

The Outfit Style collection is separated into two main sections: Armor Styles and Weapon Styles. These are further divided into lesser subsections. Under the Armor Styles section, you can view pieces for the Head, Chest, Legs, Shoulders, Feet, Hands and Waist. Weapon Styles consist of the following subheadings: Two-Handed, One-Handed, Shield, Bow, and Staff.

With the advent of the Set Collection, players no longer have to worry about sets clogging up their bank and inventory space. If you've collected a set piece, you can reconstruct it at a Transmute Station using crafting materials and Transmutation Crystals.

The left side of the Set Collections UI contains the navigation menu, including the headings separating set pieces by where they are found. On the right-hand side, you have a list of sets found in whichever subheading you're looking at.

Collectibles in the Sets tab are separated into 10 tabs, which are further divided into subheadings:

There is a search bar above the navigation menu on the left-hand side of the window. Here, you can type something in to find a set you're looking for without having to click on any subheadings. To the right of this search field, there are drop down menus for you to modify your search by Apparel Type and Weapon Type. You can pick more than one type of apparel and weapons to view, and when you click off one of the drop down menus after selecting as few or as many items as you'd like, the Sets window will automatically adjust the contents of the menu to show you set pieces that match the criteria you've selected. For example, if you select Medium Armor and Heavy Armor in the apparel box and Restoration Staves in the Weapon Type box, the menu will hide everything except Heavy Armor, Medium Armor and Restoration Staves.

You can toggle a checkbox in the top right corner of the right side of the menu to Show Locked set pieces (those you have yet to collect). If toggled on, you can see which pieces you're missing from any given set. If this box is not checked, you will only see set pieces you have collected. Beneath the checkbox is a progress bar for to track how many pieces in a given category you've collected. This large progress bar displays your progress for the entire subsection you've selected. For example, you can look at your progress for sets found in Malabal Tor or for Mythic Items. Collection progress bars for individual sets are located beneath the set's name.

While you're browsing the set collection menu, your character cycles through several animations. These animations make it look like your character is trying on or adjusting armor pieces, and are only visible to other passing players