M'aiq the Badger is an upcoming pet that has yet to become available. Wild badgers that look like this pet can be seen in Northern Elsweyr. Its default name is "M'aiq?", and is seemingly based off M'aiq the Liar. 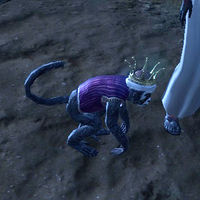 . Its default name is "Jingles".

When it's a kitten, the Mage's Sentry Cat is so adorable, it's said that some sorcerers enchant them to stay that age always. 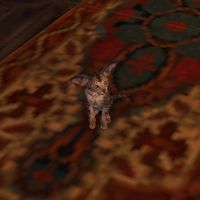 The Mage's Sentry Kitten is an upcoming pet that has yet to be available. Its default name is "Li'l Bat Ears".

These short-haired, large-eared cats are a common sight in Mages Guildhalls, where it's said their keen senses enable them to detect all manner of intruders, even those that are magically concealed or from realms of Oblivion. 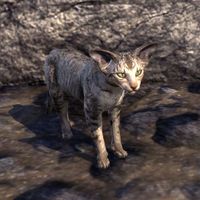 The Mages Guild Sentry Cat is available as a Legendary-level reward in Flame Atronach crates. Its default name is "Uncanny Kitty", although it originally did not have one.

Scamps are lesser Daedra used as servants and menials by a number of different Daedric Princes. The Magma Scamps are servants of Mehrunes Dagon, and can be summoned from his Oblivion plane of the Deadlands. 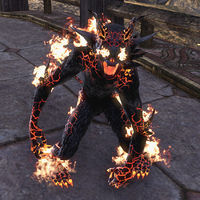 The Magma Scamp is available as a Legendary-level reward in the Scalecaller Crown Crates. Its default name is "Pumice".

Delicate in both form and color, this pink-hued butterfly flits around Elsweyr, Skyrim, Rivenspire—and around you! Tailor Medresi Grulathil looked to her own butterfly companion for inspiration while crafting ceremonial garb honoring Mara in Solitude. 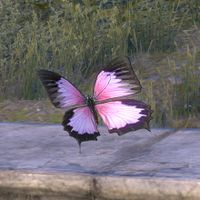 Available as a Superior-level reward in Akaviri Potentate Crates. Its default name is "Wingkiss".

As a sign of the blessing of Mara, Goddess of Fertility, in spring certain breeds of Tamriel's hens lay eggs with shells in a variety of colors. 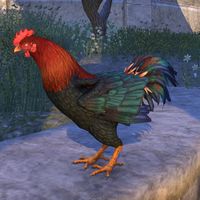 Mara's Spring Chicken is a pet that was given out during the month of April as a Daily Reward during the fourth week. They were available in the Crown Store for 00400400

from April 8 to April 12, 2021. They lay colorful eggs in pastel colors, such as purple and green. Its default name is "Egwina".

Fierce and courageous fighters, the hunters of Western Skyrim use small packs of these dogs to pursue bears. The Bear-Dogs track, corner, and harry the bears until the hunters can arrive with their spears. 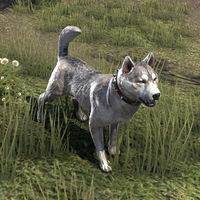 . When the player crouches, its tail goes down and it lowers its head slightly. Its default name is "Furball".

The handsome breed of Masked Bears are native to the Pale Pass region of the Jerall Mountains, which has given rise to the legend that they came in the First Era with the invaders from Akavir who ended up there. Bears from Akavir? Really? 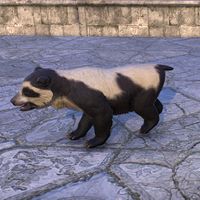 The Masked Bear Cub is available as an Epic-level reward in New Moon Crown Crates. Its default name is "Flora".

"Our Lady of the Infinite Energies, Strict but Fair Arbiter of Inner Luminance, grant unto thy most devoted worshiper a sign of thy radiant favor, mayhap a loveable, glowing Sabre Cat cub." —Sayings of Valasha 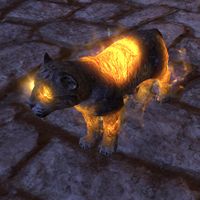 The Meridian Sabre Cub was available in the Crown Store from April 11 through 18, 2019. It is now available as a Legendary-level reward in Ayleid crates. Its default name is "Shinypaws".

"Some say that dogs of this breed don't have a mean bone in their bodies, but if you set them up to guard horses or other creatures, you'll see one fierce guardian. Also great at rounding up livestock."—Piet 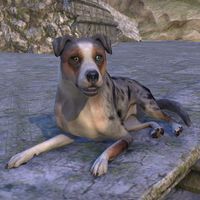 The Merle Paddock Hound is available as a Superior-level reward in Sovngarde Crates. Its default name is "Waveracer".

With its sharp teeth, scary spines, and enormous horn, this fabricant follower not only shows that you mean business as you go about your day, but also indicates an appreciation for the complex and refined machines of Sotha Sil. 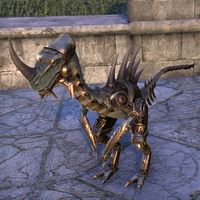 The Microtized Verminous Fabricant was available during the Tribunal Celebration Event. It could be acquired from the Impresario for 00000055

or by combining ten Sealed Fabrication Materials. Its default name is "Bristlehorn".

White cats are sacred to Dibella, the Lady of Love, and all white cats are said to be her representatives in the animal kingdom. A House of Dibella will typically have three or four milk-white cats within its walls. 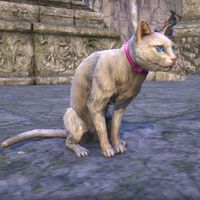 . It is now available as a Superior-level reward in Frost Atronach Crates. It later returned to the Crown Store, being available from February 11 to 15, 2021. Its default name is "Powder".

"The Mind-Shriven Scamp is an unusual specimen. Generally you find them among other mind-shriven creatures, but some addled folk have started including them in their entourage. Peculiar, at best."—Warlock Aldaale 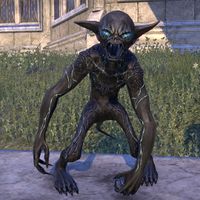 . Its default name is "Flickerstab".

Though the Argonians claim that they name each breed of Black Marsh Swamp Jelly for its hue rather than its taste, there's no denying that the Mint Jelly does have a gratifyingly refreshing flavor. 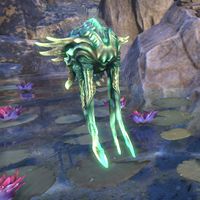 from December 20, 2018 to January 3, 2019. It returned to the Crown Store for all players from February 7 to February 11, 2019. It returned to the Crown Store once more from April 26 to April 29, 2021. Each time it returns, it is offered at a discount to ESO Plus members. It is also available as an Epic-level reward in Gloomspore Crates. Its default name is "Freshbreath".

The Molag Amur Cliff Strider is prized by reptilian connoisseurs because its coloration, though somber, is lightened by its subtle golden tones. And if startled, its squawk will cause passersby to jump and horses to bolt. 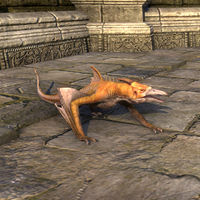 The Molag Amur Cliff Strider was available in the Dwarven Crown Crates as an Epic-level reward. Its default name is "Leatherwing".

The migratory Monarch Butterfly is a common sight across all of southern Tamriel, and it's seen in the northern provinces during summer. The Monarch is said to represent the souls of the present, in contrast to the Ancestor Moth that represents the past. 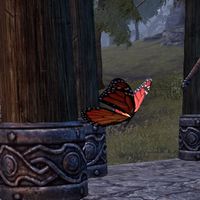 The Monarch Butterfly is available as a Superior-level reward in the Baandari Pedlar Crates. Its default name is "Thronebug".

The Moonlight Senche-Tigers have been the sleek and silvery guardians of the Khajiiti temples of the moons ever since the revelation of the Riddle'Thar. 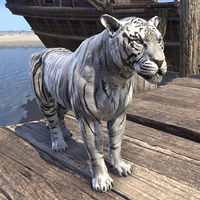 . Its default name is "Secunda", after the eponymous moon.

The greenish, or "Mossy" Netches, are most commonly found in the West Gash region of northwest Vvardenfell. The calves are docile, even for Netches, and will happily follow along behind anyone who smells of their favorite fungi. 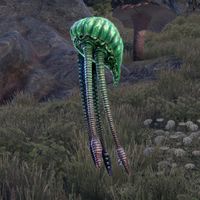 The Mossy Netch Calf is available in the Dwarven Crown Crates as a Legendary-level reward. Its default name is "Emerald", after the eponymous gem.

Are you the kind of adventurer who simply Must Loot Everything? Being followed around by the Mournhold Packrat, an actual cargo rodent, tells the world that you're an Acquisitionist who's not going to leave behind a single spoon! 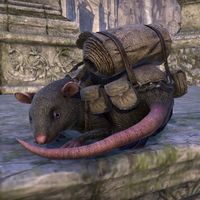 The Mournhold Packrat is a pet that was made available in the Crown Store for 012001,200

) for all players from April 12 to April 15, 2021. When purchased, it increases the inventory capacity of each of your characters by 5. This increase is passive and there is no requirement to make the rat your active pet. Its default name is "Cargo".

This pet is based on the Pack Rat available in the Tribunal expansion for The Elder Scrolls III: Morrowind.

Few can withstand the scorching heat and relentless desolation of the Deadlands. Those unlucky few who find themselves trapped there may encounter one of these scuttling horrors—a hideous reminder of their grim and eternal fate. 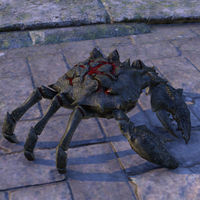 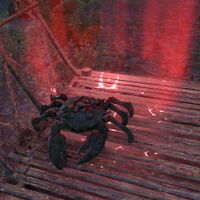 from March 13 through 23, 2020 referencing the then-upcoming DOOM Eternal game. Its default name is "Witherhope". When summoned, it emerges from a red Daedric summoning circle. It is referred to in the files as the Deadlands Ember Crab. It has much more aggressive animations and sound effects than other crab pets.