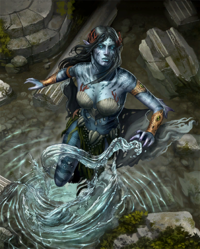 The Nereid (also called Water-Sprites by the Redguards)[1] are mer-like, feminine water spirits that live near bodies of water and can often be heard singing an angelic, but transfixing melody. They are known practitioners of water magic, an obscure form of magic, and can either become hostile or tolerant of people's company.[1] Generally speaking, the Nereid are an intelligent-folk that more often than not, protect the land they live on and its denizens, even claiming old ruins as their own haven. 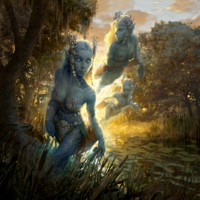 The Nereid are attuned to nature and the wild elements, and they are also mystically connected to the bodies of water they inhabit, more specifically pure and flowing fresh water.[2] Generally speaking, they can serve as caretakers and guardians of their respective habitats. They will go through great lengths to keep the sanctity and life of their home, even if it is at the expense of others. If any amount of harm comes to their homes, they will be corrupted and even suffer until they eventually perish. The Nereid and their powers can be attractive to the modern races of Tamriel, like when the Nereid of Cicatrice tended to the ill for many years and since then a settlement formed around it,[3] and there are examples like the Bosmer of Dread Vullain, who forsook their veneration of Y'ffre in exchange for the Nereid Sisters in the hills of Greenshade.[4] Even the Queen of Summerset Isles, Ayrenn was said to have danced with the Nereids of the Ilessan Hills.[5] 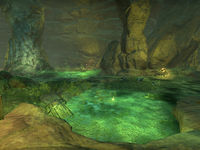 However, the corrupted pools of a Nereid can lead to heinous changes, such as the case with the Nereid sorceress, Shada, who tainted the waters of a Nedic city in Craglorn. When the Ra Gada invaded in 1E 808,[6] the Nedes made a bargain with Shada for great strength and everlasting life by drinking her water, but at the price of one's sanity and flesh. Ever since then, the city's people blindly worship the sorceress and it has since been called Shada's Tear.[7] Another such example is with the aforementioned Cicatrice.

The Nereid is feminine and mer-like in appearance, but with their own features, such as fin-like ears and scaly-striped skin. They can come in different colors ranging from blue and green, and their hair color can range greatly from black[8] to silver,[9] or even blue like their skin tone. They adorn themselves in shells, seaweed, and even coral that is fashioned into clothing.[10] They can also be seen wearing bracers crafted from metal, like gold[8] or plain silver. Attached to these bracers is a long and tattered robe of sorts. Nereids are sometimes called "water-sprites".[1] Despite the fact that they look completely different to the common sprite, this brings about an indirect connection to the Faerie. 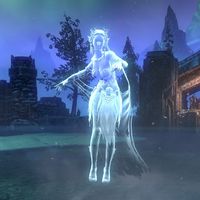 The Leimenid is a variant of nereid that practices frost magic. They resemble the typical nereid, but appear more ethereal and in a frosty mist. They are typically found in cold climates such as the Wrothgarian Mountains, or atop wintry mountains like Scalecaller Peak.[11] They have also been used in the Maelstrom Arena, in the pocket realm of the demiprince Fa-Nuit-Hen.[12]