Easter Eggs are secrets that the developers put in the game to give people a laugh when they find them. Elder Scrolls Online has a large number of such jokes. Easter Eggs differ from in-game references in that they have been intentionally hidden from the player and are unusual with regards to their surroundings.

Cultural References are objects, characters, or events in the game that refer to a specific element of popular culture; they differ from Easter Eggs in that they are usually integrated into the game world, and strong parallels can be drawn between the in-game event and the specific work being referenced. Cultural references also include allusions to elements of real-world culture, such as historical events and folklore.

If you think you have found an Easter egg or reference, please post your idea on this article's talk page before adding it to this article. 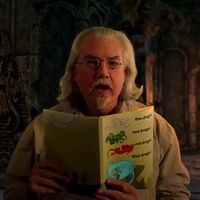 The Legend of Zelda: Ocarina of TimeEdit

Over the Hills and Far AwayEdit