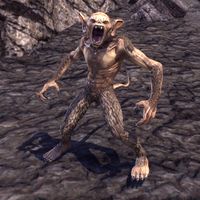 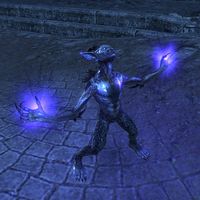 Scamps are a common Daedric creature, known for their simple-mindedness and cowardliness. Though smaller and weaker than most other Daedra, they can still be a dangerous opponent, especially when found in numbers. Do not let their lack of intellect lull you into thinking they can be easily overcome though. They are mischievous and cruel, taking delight in torturing adventurers with their agile movements in avoiding attacks. Their lack of intellect also means they are often used by conjurers to perform mundane tasks and act as messengers. Scamps have their own language, which is incomprehensible to others, and they can often be heard gibbering away.

Scamps use fire-based spells in combat, and will often stay at range to shoot at enemies. Getting hit by their attacks may apply the "Burning" effect, which does minor flame damage over time on top of the damage done by the spell. As they are Daedric creatures, Fighters Guild skills are particularly effective.